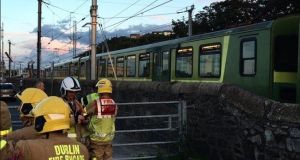 All southbound Dart services will operate as normal this morning following a train derailment which caused significant disruption for commuters on Wednesday evening.

Irish Rail described the derailment near Dun Laoghaire at 6.15pm as “low speed” and said there were no reports of injuries.

However, significant delays to services were experienced on the line as a consequence with trains travelling in both directions cancelled for a time.

Around 15,000 passengers were affected.

Some passengers were stuck on the derailed train for up to an hour before Irish Rail staff arrived to evacuate the carriage.

By last night most Dart services had resumed, with the exception of those running between Lansdowne Road and Bray.

Passengers using the Rosslare service had to avail of bus transfers.

The cause of the derailment is not yet known although Irish Rail, the Rail Accident Investigation Unit and the Commission for Rail Regulation have each begun investigations.

A number of passengers expressed frustration on social media that they had been kept on the train for a long period of time following the incident.