Ireland has ‘undermined Britain for over 100 years’

TV presenter Robert Peston made the claim that Ireland has ‘undermined Britain for over 100 years’ during interview with Jacob Rees-Mogg yesterday. Video: ITV 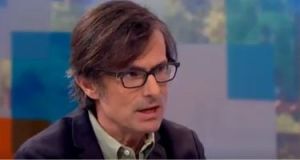 TV presenter Robert Peston has suggested that Ireland has “undermined” British governments for at least the last century.

In an interview with prominent Brexiteer Jacob Rees-Mogg, Mr Peston described the Tory as a keen student of British history, before saying: “Ireland has undermined, the issue of Ireland in so many different ways has undermined, British governments, you know, going back well over 100 years now.”

Mr Rees-Mogg responded by suggesting that the issue of Ireland had undermined British politics for “much more than 100 years. It’s a very long and complex history.”

Mr Peston suggested to Mr Rees-Mogg that in the absence of a post-Brexit customs arrangement, any Border checks could “undermine the peace that . . . has been so beneficial over the past few years”.

Mr Rees-Mogg responded by stating that it was “deeply disgraceful that people who wish to keep us in the European Union are threatening the spectre of a return to terror to try and make people accept their views”.

.@Jacob_Rees_Mogg tells #Peston that some of the architects of the Good Friday Agreement are engaging in "disgraceful" politics, seeking to keep us in the EU. pic.twitter.com/XhvlhpyoZK

He said that those who raised the prospect of a return to violence “are all committed Europeans, some of them in receipt of pensions from the EU.

“I think it’s deeply disgraceful to raise the spectre of lawlessness and of murder in pursuit of a political objective.”

Mr Rees-Mogg pointed to the pro-Brexit stance of one of the key architects of the Belfast Agreement, former UUP leader David Trimble.

Mr Trimble has said he does not share the contention of some Remainers that a return to a hard Border could undermine the peace process.

Mr Rees-Mogg is one of the foremost Tories advocating that the UK leave both the customs union and the single market.

He suggested during the interview that leaving both entities while keeping a soft Border between the Republic and Northern Ireland would be “very straightforward”, as neither the British nor the Irish government wanted to impose a hard Border.

He cited claims by the head of HM Revenue and Customs, Jon Thompson, that a Border already exists between the Republic and the North.

“There may indeed need to be non-Border checks that take place – that would be perfectly reasonable in the new situation. But if we remain in the customs union and the single market, we’d lose the advantages of leaving.”