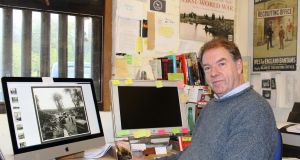 Historian and broadcaster Peter Barton, who has written several books and made documentaries about the first World War

On the night of December 18th, 1917, four privates of the Royal Dublin Fusiliers left their machine gun post east of the Somme, crossed No Man’s Land and deserted to the enemy.

The Germans were given a long list of grievances. The trenches the Irish lived in were poorly dug, the food was deteriorating and they were living on biscuits and cold tea. Leave had been denied and they were continually understrength.

Mostly, though, they deserted because of the political situation at home in Ireland in the aftermath of the Easter Rising. They were not the only ones.

German intelligence files, which have never been made public before, reveal how deeply the Rising affected Irishmen serving in the British army during the first World War.

“They know that the general mood in Ireland is more anti-British than ever . . . they say the country is ready for an uprising at any moment,” the German intelligence files state. The four deserters, described as “young, strong men”, are listed as J Ryan, Terry Burns, Daniel Keys and M Joggart.

They had volunteered between 1914 and 1916. One said he signed up because he was drunk.

The four men signed off with an extraordinary message which may have been printed and air-dropped as a leaflet over British lines. It begins: “To all good Irishmen of the 16th Division. Dear chums, you are all goddamn fools to be staying there in those dirty trenches . . . the Germans are the nicest people we have ever met.”

In another file, an unnamed Irish sergeant from Dublin captured in September 1916 tells his German interrogators that Irishmen serving at the front have begun to “ask themselves how long they could go on fighting for England, when it has shot down their relatives at home in the streets”.

The sergeant says there have been “two or three instances of large-scale collective refusal of duty, effectively mutinies” in the Royal Munster Fusiliers.

It has been an enduring historical mystery for the past 100 years as to why the Rising did not provoke a mutiny among the Irish in the British army or even reports of widespread desertion and insubordination.

If there had been incidences, they would certainly have been covered up by the British even after the war when such information would have been regarded as politically sensitive.

These files and many more have been discovered by the award-winning British historian and broadcaster Peter Barton, who has written several books and made documentaries about the first World War.

His acclaimed BBC series The Somme 1916 – From Both Sides of the Wire endeavoured to tell the story from both perspectives, revealing just how thoroughly the Germans had been forewarned of the Somme offensive. It showcased, however, only a small part of his work in German archives.

The same research also indicates that the disillusionment among the Irish serving at the front after the Easter Rising may have been much more widespread than was first thought.

One file reveals that the penalties for desertion – which included execution – was a deterrent.

“When news broke about the recent upheavals in Dublin, many had made up their mind to desert at the first opportunity, but at the last moment they had begun to worry about the outcome of such an act [and decided against it],” the file reveals.

Every Irish regiment is represented, and documents also reveal the Germans knew as early as December 1916 that the extension of conscription to Ireland “could have such serious political consequences that, in the opinion of many captured officers, the government is likely to shy away from it”.

Conscription was eventually introduced in the spring of 1918 but never implemented because of fierce nationalist opposition.

Conversations with British officers from April of that year reveal that Irishmen in the 16th (Irish) Division resented being commanded by “Englishmen or Anglophile Irishmen”, because it offended other Irishmen.

“They feel ill-used and under-valued, which naturally erodes the fighting spirit of the otherwise feisty Irish soldiers.”

The Germans had listening posts beneath their front lines from which, by the use of special equipment, they were able to intercept British and French telephone conversations. These remarkable verbatim records – written in English – include the ruminations of one disgruntled Irish officer who, at 9.25am on June 17th, 1916, just two weeks before the start of the Battle of the Somme, is heard saying “you think we Irish people are only here for doing your bloody work – the way we are being threated [sic] is absolutely a shame to civilisation”.

“First World War research in Germany is still in its infancy because the nation has for been for 70 years consumed by the catastrophic events of conflict that followed.”

Consequently, when Mr Barton visited the German archives, on many files he found a thick film of black dust. Nobody had looked at them for many decades.

He believes the records have the potential to overturn the received wisdom about the war. “I’m not interested in who won or who lost,” he says, “I’m interested in the alternative narrative that the German archives provide for so many critical and indeed symbolic events, and in the most extraordinary detail. They irrevocably change one’s perceptions of why and how things unfolded. There is no escaping the fact that the British were inveterate embellishers and fabricators – and worse.”

German intelligence-gathering operations were so thorough that they even included cuttings from The Irish Times. Passages from a report into the first day of the Battle of the Somme are underlined.

Mr Barton believes the efficiency of German intelligence-gathering goes a long way to explaining why the Anglo-French alliance never won a set-piece battle, despite their commanding numerical and material advantage.

There is no evidence, either, he stresses, that the Germans tortured POWs.

“We should not,” he says, “look at the First World War through the prism of Nazism: the evidence suggests that in 1914-1918 the Germans acted very differently.”

This is significant as there may be a tendency among captured prisoners to tell their interrogators what they want to hear.

If captured, British soldiers were repeatedly warned to give the enemy only their name and number, yet the files reveal an almost universal willingness to co-operate and talk.

“It is clear that this had a direct influence upon the fates of their comrades in future actions”, says Barton, “because the Germans were so often forewarned by loose talk and captured secret documents. It forces us to look at the war in a very different way, because British high command had no idea of the huge quantity of secret intelligence that was constantly being placed in enemy hands.”

Sitting MP Captain Charles Craig, the brother of Northern Ireland’s first prime minister James Craig, was the most famous prisoner from the 36th (Ulster) Division. He was captured on July 1st, 1916, the first day of the Battle of the Somme.

He offers confidential information about recent “secret sessions” in the French parliament, where he says prime minister Aristide Briand, “had been faced with a powerful and influential minority that favoured an immediate armistice. Briand had only been able to avert the storm by referring to the Franco-British offensive [the Somme] that was then in preparation.”

Craig is described as an officer “who makes no secret of his pro-German sympathies”. Such a viewpoint, combined with the leaking of top secret classified information to the enemy, would have been regarded in unionist circles as a singular disgrace after the Easter Rising because of German support for the rebellion.

Craig was, said the Germans, “quite fanatical” that his “sole purpose in life is to fight against the separatist aspirations of Irish nationalism”.

Mr Barton has uncovered extensive evidence of British war crimes including some by Irish-born soldiers.

A remarkable account of the capture of the Somme village of Guillemont by the 16th (Irish) Division in September 1916 comes from three German prisoners who later escaped British captivity.

All prisoners were robbed of every possession, they said, and “those of our wounded who could not walk were shot. Only those who could be taken to the rear by comrades were taken prisoner. This has been confirmed to be true by several eye-witnesses”.

Mr Barton has spent the last 15 years studying German archives, but firmly maintains that it would require several lifetimes of research to be considered an “expert”.

“The resource”, he says, “is monumental in scale and detail, and tells us so much that one cannot learn elsewhere.”

He is working on a book for publication in 2020 based upon the interweaving of British, French and German first World War records. Extensive material relating to Irishmen serving in the British army forms part of this research.

“The Germans provide us with entirely fresh perceptions, and often a new history”, he says.

“Since 1918 we have been told just one side of the story. A journalist wouldn’t dream of doing that, and yet generation after generation of historians have given us prejudiced and seriously truncated accounts of events that continue to occupy highly influential places in our personal lives and our national identities.

“Whether we like what we find or not, to have any chance of understanding what really happened we must seek the better truth through impartial research.”