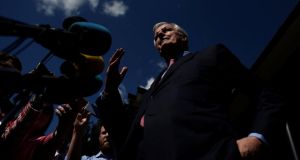 Brexit briefing: Michel Barnier was reporting back to the EU27 on his visit to Ireland (above). Photograph: Clodagh Kilcoyne/Reuters

Ireland will be used as a key pressure point at a crucial summit next month to force the UK to clarify its future relationship with the EU, Michel Barnier has said.

In a private briefing in Brussels last week, the European Union’s chief negotiator also insisted Brexit does not threaten the constitutional status of Northern Ireland and asked for “drama” to be taken out of the Border proposals.

In a briefing to representatives of the EU27, the bloc’s remaining member states, he said the risk of a breakdown in the talks later in the year will be heightened if there is no “early progress on Irish issues”. He was reporting on his recent trip to Northern Ireland and Ireland. An account of his briefing was sent to Dublin by Irish officials.

The briefing, elements of which have been seen by The Irish Times, says Germany and France support the position that talks must not progress to a future EU-UK deal unless all elements of the United Kingdom’s withdrawal treaty are agreed. This includes the so-called backstop, which would ensure no divergence in customs and trade rules between the Republic and Northern Ireland without agreed solutions on how to avoid a hard border.

The EU has proposed this would mean Northern Ireland remaining in the customs union after Brexit. That has been rejected by the British prime minister, Theresa May, and the DUP, which supports her Conservative government in a confidence-and-supply deal at Westminster.

“France also shared Barnier’s view on the need to reach agreement on outstanding withdrawal-agreement issues, including Ireland, by June,” the notes say. “Germany said it was essential that the Irish issue was not left ‘open to the end and then isolated’.”

Mr Barnier said the EU “had specific leverage points” at European Council summits last December and March. “In June, the primary leverage point will be to make clear to the UK that finalising the outstanding aspects of the Withdrawal Agreement, ‘including on Ireland’, is a precondition to a constructive discussion on the future,” the account of his briefing said.

Mr Barnier said the backstop does not affect the constitutional status of Northern Ireland but only sets out what checks are necessary after Brexit. He argued there are already checks between Britain and Northern Ireland for agricultural produce. “What he has learnt from his visit to Ireland/Northern Ireland is that all sides need to take the drama out of what is being proposed. Barnier repeatedly said he was moved by all communities in Ireland.”

Speaking yesterday, the DUP leader, Arlene Foster, said Northern Ireland must “move in lockstep” with the rest of the United Kingdom. “We don’t believe we have to stay in the customs union to have free flow between ourselves and the Republic of Ireland.”

A decision on the British government’s preferred customs option has been postponed after Ms May failed to secure the support of her ministers for a proposed hybrid “customs partnership” between the EU and UK. The arrangement would see British officials collect tariffs on behalf of the European Union for any goods coming to the UK that were subsequently destined for an EU member state. Such a proposal has already been rejected by Brussels.