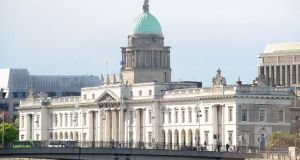 Mount Charles, the Northern Ireland support services group, is poised for growth in the Republic after winning major contracts totalling more than €8 million with the likes of the Abbey Theatre and the Custom House in Dublin.

The Belfast headquartered group, which this year celebrates its 30th year in business, has opened a new Dublin base and according to Cathal Geoghegan, its managing director has “ambitious plans” to expand its operations across the island.

Mount Charles last year grew its turnover by 18 per cent to £34 million (€38.6 million). It was established by chairman Trevor Annon initially to compete with large UK-wide corporate catering organisations.

Mr Geoghegan said that while its catering division still accounts for about 60 per cent of the company’s turnover, Mount Charles had successfully established other business support divisions over the past three decades – cleaning, vending and security related services.

He believes this will help it become a “£50 million” a year business by 2020. It counts some of the North’s largest businesses and employers among its 400 clients, including Moy Park, Bombardier, Titanic Belfast and Ulster University.

Mr Geoghegan said its strong focus on “local food, local people and family values” would help it expand in the south.

“Brexit isn’t going to stand in our way. It’s not going to deter us but like every other business in Northern Ireland we’re hoping that there will be a deal that will work for us, we don’t want to see a hard border.”