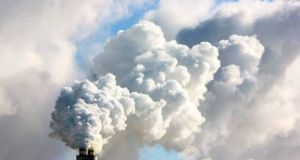 The Climate Change Advisory Council last month warned Ireland was not on track to meet its EU 2020 commitments to reduce carbon emissions, and would struggle to decarbonise its economy by 2050. File photograph: Getty Images

Mr Varadkar said the country was not meeting its climate change targets at present but claimed the Government would try to improve its record in the years ahead.

The Climate Change Advisory Council last month warned Ireland was not on track to meet its EU 2020 commitments to reduce carbon emissions, and would struggle to decarbonise its economy by 2050.

In 2009, Ireland was given a target to cut its emissions of global warming gases to 20 per cent below 2005 levels. Mr Varadkar said this failure would lead to significant fines, which it is estimated will run into hundreds of millions of euro.

“From 2020 onwards, we’re heading into some pretty major fines for not meeting our obligations,” the Taoiseach said at a briefing with political correspondents.

“I would rather spend money now on meeting our commitments than on fines from 2020 onwards.”

A report by the Environmental Protection Agency last month showed that Ireland’s greenhouse gas emissions had risen by more than 7 per cent since 2015. Ireland will also have to meet other targets at the end of 2030.

“There will be a big focus on climate change and the things that can be done in the next 10 years to enable us to meet our commitments, which we are not meeting at the moment,” Mr Varadkar said.

The Taoiseach also said the Government was preparing to spend more on transport projects in the year ahead.

“The Luas Cross-City is now open to passengers. There will also be a focus on the North and the all-island economy, improving infrastructure over the next 10 years, building a motorway to connect Dublin and the Border counties to Derry and Letterkenny, and also examining the Dublin to Belfast rail line.”