Kerry GP: ‘I can’t ring up and get a bed for my patient’ 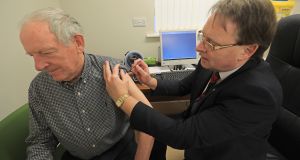 Dr Gary Stack administers the flu vaccine to Denis O’Leary, a patient at his surgery in Killarney. Photograph: Valerie O’Sullivan

Dr Gary Stack, a long-established GP in Killarney town centre, saw 17 patients between 9am and lunchtime on Thursday. A nurse at his clinic attended to a further 12 patients for such matters as blood tests and vaccinations.

This is “a typical morning” in the practice for January, “and I haven’t dealt with the post yet,” Dr Stack says.

Dr Stack is the co-founder of the out-of-hours service SouthDoc, which covers Cork and Kerry. The past week has seen 367 people from the two counties ring the service with flu symptoms, more than double the norm.

None of the 17 patients attending Dr Stack in the morning had to be sent to an acute hospital. He referred three patients to colleagues in other medical practices including for back pain, psychological and physiotherapy issues. There was one referral to a private hospital.

That is generally how GPs manage their caseload, he says. They deal with 95 per cent of cases themselves rather than send them on to hospitals where the patient may end up on a trolley.

“All admissions now have to go through casualty, through A&E. I can’t ring up and get a bed for my patient.

“A&E should be just for emergencies and accidents but everything now lands there,” he adds.

Lack of beds is one problem, but another is the admissions policy, which Dr Stack believes is leading to duplication as well as congestion.

GPs have already done the “triage” and the diagnosis, yet patients are left lingering in emergency departments while interns and others repeat what the GP has already established, he says. GPs get no feedback for days, he adds.

He says where people have health insurance he could use private hospitals, but his preference would be for acute hospitals where there is great experience in dealing with life-threatening illnesses, “but the problem is getting in”.