Analysis: The State’s over-reliance on acute public hospitals is the crux of the problem 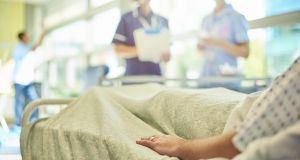 ‘While health systems all over the world face pressures, such large numbers of people waiting excessively long times in emergency departments is a uniquely Irish experience.’ Photograph: Getty Images

The persistently high numbers of people waiting on trolleys in Irish emergency departments is evidence of a health system unfit for purpose, unable to cope with population health needs.

Two decades ago, trolleys in emergency departments (then called A&Es) were a problem every winter. Now they can happen year round and the record numbers experienced in the first few weeks of January are as reliable as the New Year itself.

While health systems all over the world face pressures, such large numbers of people waiting excessively long times in emergency departments is a uniquely Irish experience. On Tuesday, the Irish Nurses and Midwives Organisation recorded the highest-ever numbers of patients on trolleys waiting for a bed.

While the numbers waiting are an indicator of the hardship experienced by sick people in need of a hospital bed and the pressure the system is under, the length of time waiting is probably a more useful indicator.

The most recent HSE figures are from September 2017. These show that there was a 2.2 per cent increase in the numbers of people attending emergency departments compared to the previous September.

The HSE figures also give the “patient experience time”, which is the time spent in an emergency department between registration and either the time a patient leaves or is admitted to a hospital bed. This shows little real change year on year, with 67 per cent admitted or discharged within six hours, 81 per cent within nine hours and 97 per cent within 24 hours last September.

However, even when compared to our nearest neighbours, who are also experiencing unprecedented pressures in their emergency departments, these wait times are extraordinarily high. The UK has a four-hour wait time to be seen in EDs, with 75 per cent seen within this time in Northern Ireland, the poorest performer. In Scotland, 94 per cent are seen within four hours.

Why is it that Ireland fares so badly on the trolley front?

Decades of reducing the numbers of acute hospital beds is a factor, exacerbated by the impact that the 2009-2014 austerity measures had on the public health system. Interestingly, community services were much more affected by staff cutbacks during austerity than hospitals were.

So while there are not enough staff or beds to meet the acute health needs of patients, it is the way our system is currently structured, organised and financed that is at the heart of this problem.

And therein lies the crux of the problem: the Irish health system is utterly over-reliant on acute public hospitals.

What we have is decades of failing to resource GPs and primary care services adequately; failing to build up community care in the form of home-helps, public health nurses, allied health professionals and social care; failure to provide quick access to diagnostics in the community; and failure to resource other models of care which have been shown to be effective, such as ambulatory care and managing chronic diseases outside of hospitals with a strong cadre of nurse specialists. All of this failure is simply propping up a profoundly dysfunctional system instead of supporting and sustaining a better one.

A recent OECD report on the state of health in Ireland found high rates of hospital admissions for chronic conditions such as Chronic Obstructive Pulmonary Disease and asthma, saying they could not “be explained by a higher prevalence of these conditions”, but more likely due to the “fragmentation of the health system in Ireland which creates substantial barriers to better care integration”, which in turn “is hampered by the ‘two-tier’ financing system, the absence of universal health coverage as well as the lack of integration of different state agencies”.

It would be interesting to know the extent of senior clinicians onsite 24/7 in all hospital EDs over the Christmas/new year period.

As well as completely reorienting and sufficiently resourcing the Irish health system to meet our demographic needs, other difficult decisions need to be made. Does Ireland’s population justify 33 emergency departments and does the capital city really need six?

And they are in the hands of our political leaders to make them.