Inside the Belfast college that moulded peace-makers and Brexiteers 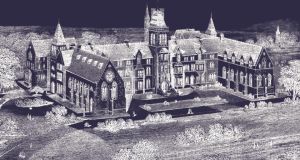 Alan Frame’s beautifully illustrated book contains many stories about its alumni who include writers John Hewitt, Robert Greacen and Glenn Patterson; artists Paul Henry, Basil Blackshaw and Colin Davidson; concert pianist Barry Douglas; actors Jamie Dornan and James Ellis, and stained-glass artist Wilhemina Geddes, who has a crater named after her on Mercury. Above, detail from the book’s cover

Methodist College, which is celebrating its 150th anniversary this year, has left its imprint on Belfast and Northern Ireland in terms of the arts, sciences, business, sport and indeed on politics and pushing forward the peace process.

Commonly known as Methody, it is located at the bottom of the Malone Road close to Queen’s University in Belfast. Hundreds of students in their dark blazers, ties and white shirts streaming in and out of its gates is a familiar sight in the city.

It was founded in 1865 and opened in 1868 to educate the sons of Methodist ministers. It ended up co-educational and open to all faiths and those of no faith, as described by Alan Frame who has written the official history of the college, Floreat Collegium, to mark its sesquicentennial.

Its first enrolment was 140 pupils. It now has 1,810 second level students and 500 pupils in its two prep schools.

The beautifully illustrated book contains many stories about its alumni who include writers John Hewitt, Robert Greacen and Glenn Patterson; artists Paul Henry, Basil Blackshaw and Colin Davidson; concert pianist Barry Douglas; actors Jamie Dornan and James Ellis, and stained-glass artist Wilhemina Geddes, who has a crater named after her on Mercury.

Sports such as rugby, cricket, rowing, hockey and athletics are central features of the school. In recent years it took up soccer but doesn’t have any Gaelic games. “At least not yet,” says Frame.

It is Ulster’s premier rugby school, having won the Schools’ Cup the most times. It also has a great choral and musical tradition. Says Frame, “It is accepted as the finest non-specialist school for music in the UK, producing more organ and choral scholars to Oxbridge than any other.”

Frame after a long career in Fleet Street keeps his hand in at writing, and as a Methody alumnus took on the challenge of celebrating his alma mater. Fresh out of Methody he joined the News Letter in central Belfast in 1964 before moving to London where he ended up as executive editor of the Daily Express.

“I suppose the book is very much a history of Ireland as well as Methody, charting the days of foundation when its setting was all fields and through both world wars and of course the Troubles,” says Frame.

“Though founded by the Methodist Church, it was non-denominational from the day it opened and now has more Roman Catholic pupils than Protestant, not to mention all other faiths and none. From day one pupils came from all parts of Ireland as well as the rest of the world,” says Frame.

Still, for much of its history Methody would have been associated more with the unionist and Protestant tradition. Those of its students who ended up in the House of Commons include Ulster Unionists Martin Smyth, Cecil Walker and Roy Beggs and two of the DUP’s leading Brexiteers, Sammy Wilson and Ian Paisley junior.

But even going back more than 100 years it also had its share of nationalists from Protestant and unionist backgrounds. Methody started off as an all-boys boarding and day school but within a short time was taking in girls, one of whom was the ardent nationalist, poet and writer Alice Milligan.

Another prominent republican was Sean Lester who arrived in Methody in 1888, around the same time as Milligan. Father-in-law of the former editor of The Irish Times Douglas Gageby (who wrote his biography), he also was a member of the Gaelic League and of the Irish Republican Brotherhood and Volunteers.

Lester from Carrickfergus, Co Antrim, was director of publicity of the first Free State government and later had a distinguished diplomatic career. He was last secretary general of the League of Nations. He so infuriated Adolf Hitler over his opposition to Nazism that a British contemporary in the mid 1930s dubbed him the “most hated man in the Third Reich”.

In its 150 years Methody has had 14 principals, the first the Reverend William Arthur, the current head, Scott Naismith. Dr Stanley Worrall was headmaster when Frame was at Methody. Pupils regarded him with “respectful fear”. Like others from the school Worrall has his place in the history of the Troubles.

After his retirement he joined a group of senior Protestant clergymen in secret peace talk with senior IRA leaders such as Dáithí Ó Conaill, Seamus Twomey and Billy McKee in Feakle, Co Clare in December 1974.

When they arrived at Smyth’s Hotel in Feakle on the wet night of December 9th they all had a drink together before engaging in more serious business the following day. According to Frame one of the clergymen noted “that the IRA had more teetotallers than the churchmen”.

The Garda Special Branch finally rumbled that the talks were on but by the time they got to the hotel on December 10th the IRA leaders, following a tip-off, had scarpered. Ruairí Ó Bradaigh as vice-president of Sinn Féin wasn’t wanted so stayed behind to greet the Special Branch men.

Says Frame, “One of the detectives asked him, ‘Where are your lads?’ Ó Brádaigh said, ‘Upstairs’.”

When they burst into the room they found among the group, Dr Worrall, Church of Ireland bishop Dr Arthur Butler, Dr Jack Weir, clerk of the Presbyterian Church in Ireland and former president of the Methodist Church, Rev Eric Gallagher. The Special Branch were not sure of their identities notwithstanding their eminence, so they had to remain in Feakle an extra night before they were free to go home.

The talks had some success as they led to a Christmas IRA ceasefire and a more prolonged cessation the following year that petered out after a few months.

Another Methody old-boy who also played a significant peace process role is the Rev Harold Good, who with Fr Alex Reid oversaw IRA decommissioning in 2005. He also was involved in decommissioning work with Basque nationalists ETA and the Farc in Colombia.

He was a school contemporary in the 1950s with the first chairman of the Northern Ireland Policing Board, Prof Sir Desmond Rea, and with the former Church of Ireland primate, Archbishop Robin Eames, who with Denis Bradley published the Eames-Bradley proposals on how to deal with the past. “They were known as The Three Musketeers,” says Frame, all again playing their part in seeking to advance peace and politics.

Another luminary of the school and its one Nobel Prize winner was Co Waterford native, Ernest Walton who won the prize for splitting the atom. Good was close to Walton, who died in 1995 aged 92. Good told Frame that shortly before he died Walton confided to him that he regretted his achievement considering its uses in warfare.

Floreat Collegium is published by Profile Editions and costs £40.

1 This time, the future of the euro really is at stake
2 State exams may be delayed until late summer or autumn
3 Coronavirus: Doctors fear Covid-19 yet to peak in the State as ICUs near full capacity
4 Coronavirus: Easter 'could be Ireland’s Cheltenham' as gardaí mount 1,000 checks across country
5 Coronavirus: More ‘striking’ evidence BCG vaccine might protect against Covid-19
Real news has value SUBSCRIBE