Amnesty International welcomes the release of Sean Binder, who was arrested in Greece 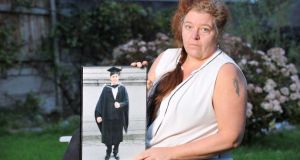 Fanny Binder, mother of Sean, says her ‘heart is full of love’ following the release of her son from jail in Greece. Photograph: Daragh Mc Sweeney/Provision

Amnesty International has welcomed the news that a charity worker from Ireland, who was arrested earlier this year on suspicion of human trafficking in Greece, has been released on bail.

Sean Binder, a 24-year-old Trinity College Dublin graduate, was in Lesbos to assist refugees in a humanitarian basis as part of his work with Emergency Response Centre International. He met with police in a voluntary capacity in August after being informed that he was a person of interest in relation to the charity’s alleged activities.

He and three other NGO volunteers have spent the last three months in a Greek jail after they were accused of helping illegal migrants enter the country. All four have been released on bail.

Fanny Binder, mother of Sean, says her “heart is full of love” following the release of her son from jail in Greece. She has paid tribute to all of his “amazing” friends who recently held protests all over the world to highlight the case.

Amnesty International in Ireland has said they welcome the release of Sean. However, they insist that smuggling charges against the humanitarian workers must be dropped.

In a statement they stressed that this this case “is the latest example of how authorities are misusing anti-smuggling laws to target activists.

“To detain dedicated volunteer humanitarians who helped people in need defies logic. People who selflessly act in these ways should be lauded not imprisoned. These baseless charges should be dropped.”

The volunteers are charged by the Greek authorities of several crimes, including being members of a criminal organisation, espionage, as well as facilitating the smuggling of migrants.

Irish MEP’s had endeavoured to assist the Binder family. However, they were hampered by the fact that, while Sean has lived in Cork and Kerry since he was a young child, he is not in fact an Irish citizen.

Sean did a Masters degree in International Relations Theory at the London School of Economics after his primary degree at TCD. He decided to volunteer in Greece in order to get practical hands-on experience, having been involved through his studies in human rights and crisis in conflict areas.

Sean was born in Germany, but has lived in Ireland since he was five when the family moved to Castlegregory in Co Kerry. His German mother Fanny travelled from her home in Togher in Cork following his arrest. His family maintain his innocence. Fanny says everyone who knows Sean is angry that he has been accused of such crimes given that he “lives for helping others”.