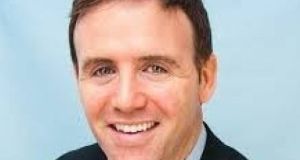 West Limerick TD Tom Neville is engaged to actress Jenny Dixon, who starred in Fair City on RTÉ, and the real-life couple have also acted together.

Fine Gael TD Tom Neville, who is also a part-time actor, has said his latest film has been sold as an in-flight film on Aer Lingus flights.

The West Limerick TD is engaged to actress Jenny Dixon, who starred in Fair City on RTÉ, and the real-life couple have also acted together in a feature film Full Circle, produced and directed by Noel Brady.

Neville’s latest Irish-made short film, Colour of Forgiveness, sees the life of his lead character, ‘Tom’, spiral downwards after his fiancé ditches him at the altar.

Directed by Dawid Gral, the film tells the story of how the lives of a couple, ‘Tom’ and ‘Maria’, who is played by Christina McMahon, are changed forever.

“It examines the fundamentals of a relationship that even with the best of intentions can often be doomed,” Neville said.

He said the film has been nominated for two international movie awards and will now be available to a wider international audience on Aer Lingus flights.

“I was told by the director that the movie had been sold to Aer Lingus. I’m really delighted for everyone involved in it.”

As well as being a trained actor, he also a masters degree in music, media and technology from University of Limerick.

Neville (43) was also previously nominated for an award at the Richard Harris International Film Festival for his monologue portrayal of heroin addict, Mark Renton, made famous by Ewan McGregor in the 1996 cult film Trainspotting.

He said he was “very proud” that parts of his new film were shot in a pub in Killfinny, “not far from where I grew up”, and previously owned by members of his extended family.

“I apply myself to acting in a completely organic way and I let the creativity flow...and, wherever it goes, it goes. So I’m delighted,” he added.

Neville admitted “acting is something that is part of me” but he said that politics is his “number one” priority.

Being able to marry his hobby with his “passion” for politics, has helped him cope with the normal stresses of life, he said.

“I’m grateful for it...acting is something that will always be part of me, its part of who I am. It’s important for me.”

For anyone who has difficulty expressing how they feel through words, “art can be a healing therapy”, he added.

“I studied a musical therapy module as part of my masters and the positive effects are unbelievable. Art is about community; it’s fluid and organic, and less rigid than politics; and that is to be welcomed and encouraged.”

Colour of Forgiveness is showing on Aer Lingus flights until the end of January 2019.

2:40 Minneapolis bristles with tension once again over police killing