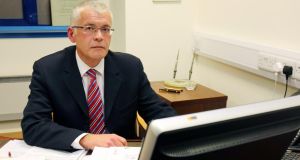 William Buchanan, son of murdered RUC officer Bob Buchanan, said: “I, on behalf of the Buchanan family, wish to place on record our appreciation for the diligence and integrity of Judge Peter Smithwick and his team.” Photograph: Paul Faith/PA

The son of Supt Bob Buchanan, who with his RUC colleague Chief Supt Harry Breen was killed in an IRA ambush on the Border in 1989, has described the findings of the Smithwick Tribunal as “incredible and shocking”.

William Buchanan, who was 25 when his father was murdered, last night said that at the time of the killings the RUC chief constable and the Garda commissioner discounted that a Garda “mole” was operating on behalf of the IRA.

“The findings of Judge Smithwick are both incredible and shocking and confirm the existence of a mole in Dundalk station – this led to my father’s death,” he said.

“I, on behalf of the Buchanan family, wish to place on record our appreciation for the diligence and integrity of Judge Peter Smithwick and his team. They have been untiring in the performance of their task and we trust the State will take cognisance of the findings and learn valuable lessons for the future,” added Mr Buchanan.

The Buchanans’ solicitor Ernie Waterworth, who attended “almost every one of the 132 days of evidence”, said it had been a difficult process for the Buchanan family.

‘Sceptical’
“As a lawyer, I was at times sceptical as to whether there would be an open and honest finding, possibly due to a perception – very adequately described by Judge Smithwick – that in the South of Ireland there existed a culture of failing adequately to address suggestions of wrongdoing, either by political expedience or by virtue of misguided loyalty, that has been a feature of life in this State,” he said.

Mr Waterworth praised Judge Smithwick and his team. “To present the findings as they have is reassuring,” he said.

“Judge Smithwick highlights his desire for the State to move away from this culture of ignoring wrongdoing and to embrace an open and honest approach in all matters, irrespective of the consequences.

“We now await with interest how the State responds to the findings and recommendations of Judge Smithwick.”

Increased co-operation
Northern Secretary Theresa Villiers said she would raise the collusion finding with the Government.

“An important point to remember is that levels of co-operation between An Garda Síochána and the PSNI are now at unprecedented levels and are playing a crucial part in combating terrorist attacks in Northern Ireland, ” she said.

DUP Minister for Enterprise Arlene Foster said the report “must act as a catalyst for further movement towards an acknowledgment by the Irish Government of the role played by Dublin during the Troubles”.

“The findings of Judge Smithwick within this report are damning.

“It highlights not only the collusion which took place in relation to the murder of Chief Superintendent Breen and Superintendent Buchanan, but also points to other collusion by officers from Dundalk Garda station,” she said.

Former Ulster Unionist leader Tom Elliott said the report confirmed that successive Irish governments did not do enough to stop the IRA.

SDLP policing spokeswoman Dolores Kelly said, “The fearless approach of Judge Smithwick is a measure of how to deal with the past.”

Traditional Unionist Voice leader Jim Allister said the report was a “devastating exposure of the Garda complicity in IRA murder”.