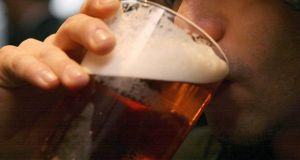 Almost one in five said they engaged in regular binge drinking sessions, while 44% reported weekly drinking.

Almost two-thirds of people under 25 years of age drink alcohol as a coping mechanism, according to new research.

The 2019 Drinkaware Index, carried out by Behaviour & Attitudes with a representative sample of 1,000 adults, also showed the current generation of under-25s had their first alcoholic drink at 14.3 years of age, compared with the national average of 15.5 years.

More than a third (34 per cent) of under-25s reported binge drinking, which is defined as six or more standard drinks in one sitting, on a weekly basis, compared with 18 per cent of the whole drinking population.

Some 64 per cent of under-25s said they drank as a coping mechanism compared with 50 per cent in terms of the national average.

The coping mechanisms cited were: “to cheer you up when you are in a bad mood or stressed”; “to forget about your problems”; or “because it helps you when you feel depressed or anxious”.

More than a quarter of under-25s acknowledged their drinking habits could cause future health problems.

Drinkaware said the findings displayed “a deep-rooted and broad acceptance” of excessive drinking as “our cultural norm”. Almost three-quarters said drinking to excess was “just a part of Irish culture”. This was shared by all age groups and both sexes.

Almost one in five adults said they engaged in regular binge drinking sessions, while 44 per cent reported weekly drinking.

Drinkaware chief executive Sheena Horgan said it was “of particular concern” that these drinking habits appear “even more embedded” among younger people.

“The negative impact of alcohol in Irish society is widely known,” she said. “What is less comprehensive is published analysis on the motivational drivers, the behaviours and attitudes of Irish society towards alcohol across different demographics and ages.

“To get to the heart of the problem, we need to examine and reassess some of our deep-rooted cultural norms and wide acceptance that we are simply excessive drinkers by virtue of our national heritage.”