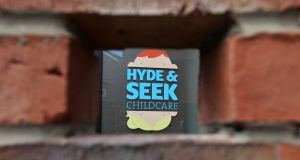 An investigation was carried out by RTÉ into Hyde & Seek, a company that runs four creches in Dublin. Photograph: Collins

Tusla, the child and family agency, has said it will ramp up regulatory enforcement and social work intervention after receiving footage of concerning practices at a chain of Dublin creches on Thursday.

Tusla is set to appear before the Oireachtas Committee on Children as early as next Wednesday following an undercover investigation that revealed a pattern of disturbing behaviour at the Hyde and Seek chain of creches.

A spokeswoman for the agency said it had received footage from RTÉ on Thursday which was “of serious concern”.

It said this “will lead to enhanced regulatory enforcement proceedings and social work intervention, which will involve the Garda”.

TDs on the committee were written to on Thursday with enquiries about their availability for the hearing next week, despite the fact the Dáil is in recess.

It is understood around four TDs have indicated their availability for the meeting where it is expected that Tusla and potentially the assistant secretary general of the Department of Children may appear.

The investigation was carried out by RTÉ Investigates into Hyde & Seek, a multimillion euro company that runs four creches in Dublin with a fifth opening shortly.

Footage taken by undercover researchers over the past several weeks shows cots packed into rooms leaving it difficult to access babies in the event of an emergency.

Other footage shows children being fed cheap instant meals instead of the dishes advertised to parents.

A group representing about 30-35 parents of children attending Hyde and Seek creches said they feel “betrayed” by the creches as well as the State and Tusla.

“We are devastated by what was revealed by the programme,” the group said in a statement.

“We trusted the creche to provide the standards of care it advertised and undertook to provide, at all times, and from all carers. This trust was badly misplaced.

“Furthermore, we trusted that the State, through the Department and its regulatory and oversight body (Tusla), would provide a framework within which the breaches of regulations broadcast last night could not occur.

“It appears that the current oversight system, even when it detects breaches, is inadequate to ensure that the same, similar, or more serious breaches do not occur again. This leaves us asking whether the system is fit for purpose.

“Our trust has been betrayed. We call on all parties concerned to immediately address how this happened, and to credibly explain how they will make amends.”

Anne Davy, the owner of Hyde & Seek, stepped back from “front line work” ahead of the documentary which aired on Wednesday night.

Minister for Children and Youth Affairs Katherine Zappone said she was “shocked and angered” at the mistreatment of the children.

“I was appalled and horrified. I share parents’ distress at seeing young children being subjected to such abhorrent behaviour. I am disgusted by what I saw,” she said.

The Minister said she remains confident in Tusla, the independent regulator of child services, adding that Tusla has been taking “robust action” to address poor standards and management failings.

Fine Gael TD and chair of the committee Alan Farrell said the core element of the questioning would be around why the facilities in question remained open.

“I am absolutely appalled by the mistreatment of children and clear lack of standards revealed on Primetime’s investigation last night.

“The disregard of fire safety, the prioritisation of staffing needs over children and the wanton disregard for child:adult ratios have deeply shocked the nation.

“The documentary revealed a complete failure to adhere to Tusla guidelines and instructions, poor management and unbelievable mishandling of children.”

Tusla said today it will take full action, up to criminal prosecutions and to remove Hyde & Seek creches from the register so they can no longer operate.

Tusla’s director of quality assurance at the agency Brian Lee said the investigation had left him “sick to the stomach” about what he had seen.

“We don’t have powers of immediate closure and that is something that I am going to be seeking from the Department of Children, Youth and Affairs,” he said. “We need those powers.

“We have to make a very clear case of evidence to make sure a service is closed and we are in that process with this service now that we actually have footage of child protection issues and serious breaches of regulation.

“We are going to be taking swift action with these services using all the powers available to take this registered provider to task.”

He added: “I am going to make sure the full rigour of the law is applied in this case.”

In 2004, Ms Davy was prosecuted and convicted when staff from their Tolka Road branch left behind a three-year-old boy on his own at a local playground.

She was also convicted for a number of other regulatory breaches of regulations.

Three years later in 2007 she was convicted again for breaching regulations including child to adult ratios and failing to keep records. During these years the company changed name three times.

1 Sinn Féin seeks to draw line under TD’s ‘unacceptable’ tweets
2 UK to close borders to non-English speakers and unskilled workers
3 Draining the swamp? Trump in spree of clemency for rich white men
4 A Russian cruiser with ‘cannibal rats’: What other ‘ghost ships’ could be out there?
5 New Sinn Féin TD apologises for ‘glib, off-the-cuff tweets’
Real news has value SUBSCRIBE