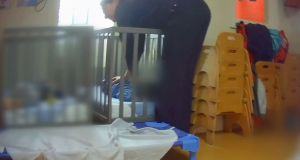 An undercover investigation has revealed a pattern of disturbing behaviour and practices in a chain of Dublin creches including fire-safety breaches and rough handling of children.

The investigation was carried out by RTÉ Investigates into Hyde & Seek, a multimillion euro company that runs four creches in Dublin with a fifth opening shortly.

Footage taken by undercover researchers over the past several weeks shows cots packed into rooms leaving it difficult to access babies in the event of an emergency.

There was evidence of poor training and knowledge on the part of staff; training for one new staff member appeared to consist of reading them a four-page leaflet. Two staff members did not appear to know that Sids stands for Sudden Infant Death syndrome.

Other footage shows children being fed cheap instant meals instead of the dishes advertised to parents.

Babies were restrained in high chairs for lengthy periods, causing them to become highly distressed. In one instance a child was placed alone in a room with the door closed for misbehaving.

Some of the most shocking incidents appeared to occur at the hands of Hyde & Seek’s majority owner, Anne Davy, who also manages the chain’s Tolka Road creche.

Ms Davy is caught on camera shouting at very young children when the room they are playing in becomes untidy.

In other footage she is seen flipping toddlers on to their stomachs and holding them down in their cots in an effort to get them to go to sleep. She also instructs staff not to make eye contact with the children.

Several of the breaches were first uncovered by Tusla inspections as early as 2015, yet persisted when RTÉ undercover researchers filmed in the creches in recent weeks.

In advance of the programme, which aired at 9.30pm on Wednesday, Hyde & Seek announced Ms Davy would no longer engage in frontline childcare. However, it is understood she will retain her management and ownership role within the company.

In a detailed statement, issued by a PR company on behalf of Hyde & Seek, the company acknowledged the issues raised by RTÉ and said it intended to make several changes to its childcare practices and to “restructure their management”.

In a letter sent to parents last week the creche said issues around cot overcrowding had been addressed and suggested some of RTÉ’s allegations were unfair. It also stated that an unannounced inspection by Dublin Fire Brigade found “no fire safety issues at the premises”.

Between 2014 and 2018, Hyde & Seek Childcare Ltd profits after salaries amounted to almost €2.75 million. During the same period it received €1.25 million in taxpayer-funded Government subsidies.

Ms Davy (64) and her companies have several previous convictions for breaches of childcare regulations. She was fined €1,200 in 2005 for failing to provide adequate safeguards and supervision for a three-year-old boy who was left behind in a park during an outing the previous year.

The creche name was changed to Hyde & Seek afterwards.

Hyde & Seek has since been prosecuted twice, once earlier this year for failing to register its creche in Glasnevin with Tusla for 14 months and once in 2007 for improper record keeping and failing to abide by adult-to-child ratio guidelines.

Similar failings appear in the recent footage gathered by RTÉ. In one clip from the Tolka Road creche Ms Davy tells the undercover researcher to “make up” entries about playtime activities and child interaction for the daily journals.

In a statement, Hyde & Seek said Ms Davy’s words were “clearly not meant to be taken literally”.

The ratio of carers to children was regularly in breach of regulations, RTÉ said. In the Shaw Street creche, up to 18 children were left in the care of one adult at lunchtime. The regulations say the ratio should be no more than 1:5.

In response Hyde & Seek said that although ratio polices were not always complied with, the breaches were not as serious as RTÉ stated and were for very brief periods.