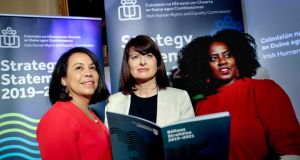 The Irish Human Rights and Equality Commission (IHREC) has expressed concern about reports that some women have had difficulties accessing legal abortions following the introduction of new legislation permitting terminations in certain circumstances.

The State’s human rights and equality institution said it would act to uphold people’s rights to healthcare under the Healthcare (Regulation of Termination of Pregnancy) Act 2018.

Publishing a new strategy statement for 2019-2021 on Wednesday, chief commissioner of IHREC Emily Logan said: “We have heard how operating within such a new legal framework is challenging for practitioners and policy makers, but we must be vigilant that the rights of patients, now on the statute books, are being vindicated.”

“As a commission, we have a mandate to keep policy and legislation under review. We will be monitoring the implementation of the new legislation, particularly in relation to reports of the barriers to access to legal terminations,” Ms Logan added.

“I want to state clearly that the commission will act, in whatever capacity is available to it, to support women and girls to vindicate their rights.”

The commission has set out four strategic priorities, including the protection of the rights of those who face the greatest barriers to justice, and influencing legislation, policy and practice.

Ms Logan said most of the commission’s emphasis up to 2021 would be on promoting access to justice.

“The nature of human rights and equality is that the people who are marginalised may not even be aware of the commission,” Ms Logan said.

“We recognise that while we have a lot of influence and we have legislative power, that we need to have relationships with people who have the proximity and trust of communities who may need our help – that means working with any organisation that is trying to promote and advance human rights and equality.”

In terms of socio-economic rights, it will prioritise three key areas; housing, health and decent work.

It will also be focusing on combating racism and on promoting interculturalism, which is provided for under the IHREC’s statutory mandate.

Ms Logan said the commission had already done some research on racism and online hate speech.

“We will be looking to strengthen the current legislation on hate. The Prohibition of Incitement to Hatred Act 1989 is not fit for purpose.

“We understand that’s under review, but it should be strengthened,” Ms Logan said.

The commission will also dedicate time to monitoring the implementation of the UN Convention on the Rights of Persons with Disabilities, which was ratified by the State last year.