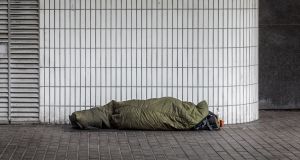 The number of those between 18 and 24 presenting as homeless has almost doubled since 2014.

Young homeless people are at the “very bottom of the list” when it comes to housing, a conference has been told.

The Irish Coalition to End Youth Homelessness has expressed alarm that the number of those between 18 and 24 presenting as homeless has almost doubled since 2014.

In December, the last month for which figures are available, there were 864 young people in that age bracket accessing homeless services.

Despite the numbers, there are no housing units built for young people by any local authority.

Focus Ireland co-ordinator Alison Connolly said many young people who present as homeless can no longer live with their parents or parent, and have complex needs.

“We know that with the right interventions their specific needs can be addressed and they can move out of homelessness and into productive, independent adulthood.”

The coalition has published an action plan stating that many young homeless people are not only hidden but also forgotten.

They have “no hope” of social housing and their youth makes them unattractive to private landlords, the plan states.

They are also the least likely to know where to get support or to present to services and are more likely to stay with friends or family in “unsustainable situations”.

It also called for a stock of appropriate accommodation to be made available for young people especially one bedroom units.

In order to prevent homelessness, the coalition recommends early intervention supports for families in which there is a risk.

This would involve mediation, counselling and mentoring services.

The plan is not costed. The Welsh Government has allocated £10 million (€12 million) this year into addressing homelessness in the country.