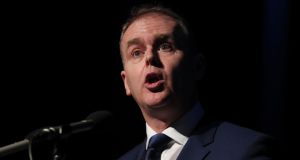 Appeal documents filed on behalf of the Minister for Education Joe McHugh show he will argue that no such right to a third level education exists Photograph: Brian Lawless/PA Wire

Should every individual have a right to access higher or further education after they leave school?

It’s a question which lies at the heart of the Minister for Education Joe McHugh’s decision to appeal against key elements of a landmark ruling in favour of Rebecca Carter, whose Leaving Cert points were incorrectly totted up.

In the Irish Constitution, there is no specific right to higher or further education.

However, in his ruling in the Carter case, Mr Justice Richard Humphreys found that the right to earn a livelihood is well established in Irish constitutional law.

“In the modern world, it is difficult and in some cases impossible to earn one’s livelihood without access to higher education and vocational training,” the ruling states.

“He or she who wills the end must will the means. The recognised constitutional right to earn a livelihood would be meaningless without the concomitant recognition of a right of reasonable access to available higher education and vocational training, commensurate with the ability of the citizen.

“Therefore, the latter right must be regarded as a constitutional right that flows from the former right.”

Appeal documents filed on behalf of the Minister for Education show he will argue that no such right exists.

There is, clearly, concern that recognising such a right could lead to legal proceedings from individuals who feel they have been denied entry to higher or further education.

Could, for example, a student with a passion for medicine be able to take a case on the basis he or she was not able to secure a place in an appropriate higher education course?

“The findings of the High Court, as appealed, have broad implications and will most likely result in others initiating proceedings in reliance on those findings,” the Minister’s appeal document states.

“The Minister is anxious to bring legal clarity to the issues he has sought to appeal . . . in advance of the allocation of places for higher education or vocational training for the academic year commencing in autumn 2019.”

Politically, however, this is awkward territory for the Government, especially at a time when it is promoting increased access to higher  education.

Take this quote, from the National Plan for Equity of Access to Higher Education 2015-19.

“As a country we have everything to gain and nothing to lose by increasing levels of participation in higher education among all Irish citizens,” it states. “It makes sense socially and it makes sense economically.”

For observers, it may well appear the Government is on the one hand promoting access, and on the other stating that there is no right of access.

This also raises the politically thorny issue of how to fund access to higher education.

This is a can the Government has firmly kicked down the road.

Ultimately, these are issues which will play out at the Court of Appeal case, which is due to be heard in April.

The Minister has been keen to point out that the appeal has nothing to do with the particulars of Rebecca Carter’s case, and her place in UCD will not be threatened.

Instead, he is just appealing broad constitutional and legal matters raised in the ruling.

It is also worth noting that Mr Justice Humphreys’s judgement acknowledges that a right to higher or further education may be qualified.

He said questions regarding the costs to the student availing of such education and training may be for another day.

His overall conclusion, however, was clear: if an individual has a right to earn a living, they should have a right to access the appropriate level of higher education or training.

In fact, he went further by stating there were reasons why a “right of reasonable access” to higher or further education should be recognised as a stand-alone right.

The right to access higher education was provided for in international law and there was no reason to acknowledge only some scaled-down “bonsai version” of rights for Irish citizens.

Whether judges in the Court of Appeal see the issue with anything like the same clarity remains to be seen.