As March 29th approaches, could the UK postpone or cancel Brexit? 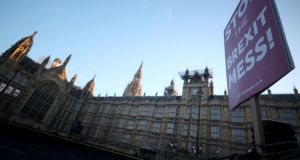 A sign is seen during an anti-Brexit demonstration outside the Houses of Parliament in London. File photograph: Hannah McKay

As the countdown clock continues to tick down to the UK’s departure from the European Union with no agreement in place, the chances of Brexit being delayed to buy Britain more time have increased.

There are a number of options that London could pick from to avoid the heavy economic cost that would come from crashing out of the EU without a deal, though none is straightforward.

Under Article 50 of the Lisbon Treaty - an EU member state’s exit mechanism from the bloc - the UK could seek an extension to the process for a specified period of time but only if each and every one of the other 27 EU member states agrees at the European Council, the group of EU heads of state and government. It is possible that member states might allow an extension but only for a short period of time and in exceptional circumstances, for example, to allow both sides time to make better preparations for a no-deal scenario. The European elections on May 23rd complicate any timeline and MPs must vote to change the “exit day” in the UK’s withdrawal act, which may also spell trouble. The EU is unlikely to allow the UK to delay Brexit for an unspecified period to permit continuing political uncertainty around unspecified alternative arrangements to the contentious backstop to avoid a hard Irish border.

The UK can cancel Brexit unilaterally, without seeking the permission of the other 27 EU member states, according to a ruling of the European Court of Justice last year. If this happened, the UK’s relationship with the EU would remain on the same terms, as it was prior to the Article 50 process. The revocation must take place before the March 29th exit date, must be “unequivocal and unconditional.” In other words, the UK must make it clear it wishes to retain EU membership. Under the ruling, the UK must meet its own constitutional requirements and follow a democratic process. This has been interpreted that the UK would need an act of parliament to revoke Article 50 which could throw up political and even legal challenges given the likely opposition from pro-Brexit MPs. Cancelling Brexit seems the least likely option given that both the two main parties at Westminster have ruled out reversing the UK’s vote to leave the EU.

There is nothing, at least no official obstacle, to stop the UK using the revocation of Article 50 to cancel Brexit and then reapplying to leave again at a later date. There is, however, the European Court of Justice’s ruling that revocation must be “unequivocal and unconditional.” This makes it clear that the UK can only revoke to remain, not to buy more time in order to leave on more favourable terms or to avoid a no-deal scenario. The court’s advocate general said prior to the court ruling that revocation could not be an “abusive process” and that it must be done in good faith but there is nothing to stop the UK from deciding to leave at a later date. This tactic would not win the UK many friends in Europe and the EU may be able to veto any revocation if it believes the UK is only playing for time. The court could also render the application to leave void if it believes Britain is revoking with the intention to extend rather than to stay.