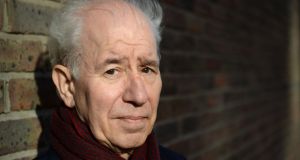 Osgur Breatnach: The Special Detective Unit picked up about 40 members and associates of the IRSP for questioning. After they allegedly started beating Osgur he had a decision to make. Photograph: Dara Mac Dónaill/The Irish Times

There’s an underground tunnel running between the Bridewell Garda station and the adjacent court. Its purpose was to allow for the secure transfer of defendants from one building to the other.

During hearings defendants would emerge from the dark passage into the middle of the tunnel flanked by gardaí.

When Osgur Breatnach was brought down to the tunnel by detectives in the early hours of April 7th, 1976, he thought he was being taken to a special District Court sitting on charges of refusing to account for his movements on the night of the Sallins train robbery the previous month.

Since he and several others had been rounded up by detectives the previous day, Breatnach, a journalist and member of the Irish Republican Socialist Party (IRSP), had refused to speak to gardaí investigating the robbery, except through Irish.

There was no special sitting of the District Court that night – something Breatnach says he realised when he saw the other end of the tunnel was closed.

His trial was notable for the fact that one of the three judges, John William O’Connor, apparently kept falling asleep

So began arguably the most serious miscarriage of justice in the State’s history. At the time gardaí were under massive pressure to combat the growing threat of paramilitary activity in the South, particularly large-scale robberies.

When the mail train was robbed at Sallins, Co Kildare, detectives needed to get results.

The Special Detective Unit picked up about 40 members and associates of the IRSP for questioning. After they allegedly started beating Osgur he had a decision to make.

He could sign what they wanted him to sign and then speak to his solicitor who would raise the alarm about what they were doing to him and others. Or he could hold out.

As the alleged beatings continued upstairs, he says it occurred to him he might be killed. “Part of my mind was saying this is all going to come out, how are they going to cover it up? The only way they can cover it up is to kill me.”

At one stage he considered hanging himself in his cell so he couldn’t be forced to implicate anyone else, he says.

In the end he decided to tell gardaí he was involved. Breatnach recalls the process of making the statement as almost farcical. At first he just said, “Bhí mé ann, I was there.” The detectives weren’t happy; they needed details, he says.

After another alleged beating, he says one of the detectives filled out the statement himself, asking Breatnach the occasional question.

Breatnach says his plan at this stage was to admit to the robbery but feed the detectives obviously false information which would later prove his statement was given under duress. He even signed his name with the letters slanted the wrong way. In the end it wouldn’t matter.

He was released a short time later only to be rearrested outside Bridewell Garda station. His lawyers brought an application to the High Court to have Breatnach released.

Acting for the State was solicitor Aiden Browne who would later give evidence to the robbery trial that he was “shocked” at Breatnach’s appearance.

The High Court ordered Breatnach to be taken to Richmond Hospital for assessment. He lay in bed with a detective at the end. When the hospital judged him fit for release he was arrested again.

The legal travails which followed have been well rehearsed over the years, particularly those relating to Breatnach’s co-accused Nicky Kelly.

In short he and his co-accused went to trial before the non-jury special criminal court, a trial notable for the fact that one of the three judges, John William O’Connor, apparently kept falling asleep.

“The clerks would notice it. They would slam big books on the table or bang the door on the way out to wake him up.”

The lawyers in the case were reluctant to raise the matter and embarrass the judge but Breatnach instructed his barrister Paddy McEntee to make a complaint.

The three judges retired to consider the matter before returning and ruling the judge had not been sleeping. A subsequent appeal to the Supreme Court also failed.

The Special Criminal Court trial collapsed a few weeks later when Mr O’Connor died. A new trial took place shortly afterwards and Breatnach, along with his co-accused Kelly and Brian McNally were convicted of the train robbery.

The only real issue at play was whether the men’s statements admitting participation in the robbery would be admitted into evidence. The defence pointed to evidence the men had been severely beaten by gardaí.

Gardaí responded the men had beaten each other up in their cells. However Breatnach never shared a cell with someone else in the Bridewell; in his case the gardaí claimed he beat himself up.

At all points gardaí strongly denied beating the men.

Once the Garda statements were admitted “as sure as night follows day we knew we were going down”, Breatnach says.

Before sentence was handed down Kelly fled abroad. Breatnach says he could have fled too at various points but he wanted to stay and highlight the injustices of the Special Criminal Court. “I was going down and I was going to take the whole thing with me.”

He was sentenced to 12 years penal servitude. He immediately started work on his appeal. A year and a half later he won. The appeal court quashed the convictions of Breatnach and McNally on the basis that they had been the victims of “oppression”. However, crucially, it never made a ruling on the trial court’s finding that the men had beaten themselves or each other up, nor did it rule on whether they had been tortured.

A later civil case awarded Breatnach about £400,000 in compensation. Kelly returned to Ireland where he spent four years in prison, some of it on hunger strike, before he was also released. In 1992, he received a presidential pardon.

In later years the IRA twice claimed responsibility for the robbery.

Breatnach (68) has had his ups and downs over the years. He suffers from PTSD and is constantly paranoid. He also suffers from diabetes. Recent revelations of Garda corruption by whistleblower Sgt Maurice McCabe have given him flashbacks, he says.

But they have also given him hope someone in authority who was involved in his case will speak out publicly. He’s looking for a full inquiry into what happened to the three men and the release of a DPP review of the case conducted in the early 1990s.

“I’m hoping if one guard is willing to come forward others are too. But there is a very strong culture in there now, one of blue omertà,” Breatnach says.

“I’m not looking for revenge. I just want the truth,” he says.

Breatnach’s story will be detailed at 9.30pm on Wednesday on TG4 as part of its Finné series of documentaries.