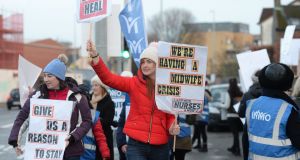 The Health Service Executive would have the right to move nurses – potentially within a 40km radius – for weeks at a time or within a single shift, under a draft new contract drawn up by the Government.

The new terms, which would allow for redeployment from hospital to community settings, could also see nurses rostered to work shifts lasting four, six, eight, 10 or 12 hours, were presented to nursing unions at talks on Friday and are in return for pay improvements as part of a settlement to the recent nurses’ strike.

The introduction of a new contract and the new enhanced nurse grade were key elements of the Labour Court settlement proposals which led to the suspension of the recent wave of strikes by members of the Irish Nurses and Midwives Organisation (INMO).

The draft contract for the enhanced nursing grade says that while the staff concerned wouldnormally be based at specific locations they may be required to operate from other places of work “in order to meet the requirements of the service”.

It says the staff may have to work at such other places of work “as determined by the employer on a regular (week by week) or intermittent (during a single shift) basis”.

There would be no compensation for having to transfer from “one or more of the above locations to another place of work”, the draft contract states.

It also says that any transfer to another place of work would be in accordance with the distance limitations, if any, set out in national agreements with trade unions from time to time.

Public service agreements over recent years have permitted staff to be redeployed to distances about 40km away.

“Your duty roster will be flexible and may, as determined by the employer, provide for 4-hour, 6-hour, 8-hour, 10-hour or 12-hour shifts and provision of services over an extended working day in line with clinical and/or service needs identified through predictable patterns of care.”

The Labour Court proposals envisaged nurses moving on to the proposed new enhanced grade after completing three points of the existing scale. In return they would receive increases of about €2,500.

The Government’s draft proposals have already been rejected by the INMO.

“This draft is the employer’s opening move in negotiations and is not acceptable to the INMO and our members. We have robustly objected to it in talks. As in any negotiation process, the opening position will not be the final one. The Labour Court anticipated this and allowed for a period of negotiations,” it said.

“The INMO’s executive will only recommend proposals to members if it is satisfied with the proposed new contract. We will continue to engage with the employer to ensure a fair contract for our members. The INMO will be meeting the employer again on Monday and negotiations will continue during the week,” it added.