Minister to meet mother and sister of woman murdered, along with three sons, by husband 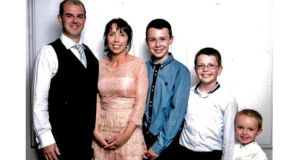 Clodagh Hawe and her three sons were murdered by Alan Hawe before he took his own life in Ballyjamesduff, Co Cavan, in August 2016.

Minister for Justice Charlie Flanagan is expected to explore options for an inquiry into the deaths of Clodagh Hawe and her three children when he meets her family on Thursday.

Mr Flanagan is due to meet Mary Coll and Jacqueline Connolly, the mother and sister of Clodagh Hawe, who want a full inquiry into how she and her three sons were murdered by Alan Hawe before he took his own lifein Ballyjamesduff, Co Cavan, in August 2016.

Senior sources have indicated the Government is open to the idea of an inquiry although the scale of such an investigation will have to be determined.

Sources have indicated the Government is anxious to meet the family’s requests and believe there are aspects of the case that could be further investigated.

It emerged after their death that Alan Hawe, a primary school teacher, had sought help for viewing pornography.

The family of Clodagh Hawe is also calling on Garda Commissioner Drew Harris to set up a special investigation unit for familicide and family annihilation.

Ms Coll and Ms Connolly say they have many unanswered questions. They have rejected the characterisation, in expert evidence at the inquest, of Alan Hawe as suffering from psychosis.

The relatives said in an interview on the Claire Byrne Live programme on RTÉ on Monday night that Alan Hawe had an issue with a work colleague, had contacted teachers’ union the INTO and in his suicide letter was concerned that “the truth was going to come out”.

Ms Coll said her daughter confided that her husband told her he had been watching pornography and had gone for counselling.

Ms Connolly said the family believed he was “avoiding the consequences of something he was doing at work”. “He rang the INTO, we don’t know why, whether it was for a grievance or whether it was for representation. We know that he had conflict with a colleague.”

The INTO said it was not in a position to disclose information regarding its contacts with Alan Hawe. It said it provides advice and guidance to members with an assurance of strict confidentiality. “INTO fully complies with, and takes seriously, all our legal obligations,” it said.

It added that the INTO’s service to its members “did not conflict with any statutory or legal obligation”.

Union and legal sources say the INTO’s rules regarding the confidentiality of dealings are normal for any trade union.

Another source that the only way confidential records might be accessed was in the context of a legal order or tribunal of inquiry.

“There is a high degree of confidentiality around complaint procedures . . . Releasing records under any other circumstances could set a dangerous precedent,” the source added.