‘Latte levy’ could reduce disposable coffee cups by 250,000 a day 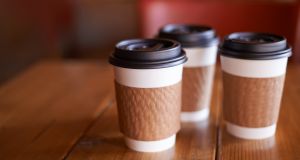 Around quarter of a million disposable coffee cups could be diverted from Irish landfill every day if a 15 cent levy on cups was introduced alongside other environmentally friendly measures. Photograph: iStock

Around quarter of a million disposable coffee cups could be diverted from Irish landfill every day if a 15 cent levy on cups was introduced alongside other environmentally friendly measures, a new piece of research indicates.

The research published on Monday suggests a ‘Latte Levy’ on its own would see the amount of takeaway cups thrown away daily by Irish consumers fall by 70,000 while the number would increase by more than 300 per cent if combined with other positive behavioural nudges including discounts for using reusable mugs, being given a free reusable cup or a refund for returning a plastic cup.

The research, by Amárach Research and Carr Communications’ Behavioural Economics and Sciences Team, said that on average Irish adults drink four hot drinks a week with around two million plastic cups are sold every day. Few of the cups are recyclable.

The Government has proposed a new 15-cent levy on most disposable coffee cups to incentivise the use of reusable cups and while the survey of over 1,000 adults found that that while 60 per cent of consumers support a ‘Latte Levy’, just 19 per cent said they believed it would bring about a change in their own behaviour.

The survey also suggested that between 70 and 80 per cent of those pole rated other measures as being more effective at incentivising them to use less plastic cups.

It suggests that if the ‘Latte Levy’ were introduced on its own, consumers would use 68,000 less plastic cups every day but were it implemented along with other measures, 250,000 disposable cups would be prevented from going to landfill every day.

When asked how they felt about the 15 cent levy 45 per cent said it was the right amount while 42 per cent felt it was too much with 13 per cent saying the levy should be higher.

“This research demonstrates that while the ‘Latte Levy’ may have impact, it would be greatly enhanced by including other behavioural nudges too such as offering discounts to those who use reusable cups, or a refund scheme for the return of plastic cups,” said Dr Rob Mooney, Research Director at Amárach Research.

“This study shows how information is framed can effect decision making and behaviour, and how they perceive the effectiveness of the policy change on their own behaviour and the behaviour of others,” he added.