How did plans to remember the RIC and DMP become so controversial? 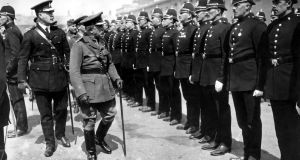 In September the Minister for Justice Charlie Flanagan became the first government minister to attend a commemoration service for the Royal Irish Constabulary (RIC) and the Dublin Metropolitan Police (DMP).

The interdenominational service has been held every year since 2012 and was organised by the Historical and Reconciliation Police (Harp) Society set up by a group of ex-gardaí, led by Jim Herlihy.

They sought to remember the 640 RIC and DMP men who died in the line of duty between 1836 and 1922 of whom 555 were killed during the War of Independence, mostly by the IRA.

The Harp society did not seek to honour the role played by the Black and Tans or the Auxiliaries. Neither was Mr Flanagan in the now-postponed State event in Dublin Castle this month, but that fact has got lost in the mists in recent days.

Significantly, Flanagan was not the only Government figure to attend the Harp commemoration in September, since Taoiseach Leo Varadkar was represented too, by his aide-de-camp Commandant Caroline Burke.

Having met descendants of some of those killed, Flanagan justified his presence by stating that for the last century the men who served in the two police forces were known as “traitors and disloyal citizens”.

In remembering the policemen he stated he was acting as a “pluralist who believes in the co-existence of peoples of different traditions on the island coming together”.

His presence, as reported in The Irish Times at the time, went unremarked in political circles. During the decade of centenaries Mr Flanagan has assiduously turned up at events remembering the Irish who fought in the first World War.

Speaking at the launch of a plaque in Rathdowney, Co Laois in 2017 to local man Lance Sergeant Jack Moyney who won the Victoria Cross in the war, he expressed satisfaction “that as a nation we are now embracing the past in a more inclusive and generous way. In so doing, we are merely facing up to reality”.

Given the muted reaction to his attendance at the RIC and DMP memorial in September and the belated warmth afforded to the memory of the Irish first World War veterans, Mr Flanagan might have concluded there would be few objections to remembering another group of Irishmen who served the Crown.

The public and political reaction to the proposed State commemoration shows that men who were in the RIC or DMP are not regarded in the same way as the Irishmen who fought in the first World War.

Neither can the legacy of the two police forces be disentangled easily from the Black and Tans or the Auxiliaries – a problem not helped by the fact that the Government failed to explain that the latter groups were not being commemorated.

Invitations to the event on January 17th in Dublin Castle were sent out before Christmas. The service was intended to be low key.

The story first appeared on The Irish Times website on New Year’s Day and then in the newspaper the following day.

Reaction was muted until the Mayor of Clare Cllr Cathal Crowe announced at the weekend that he would not be attending stating that the proposed commemoration is “revisionism gone too far”.

Since then there has been an avalanche of withdrawals from the event. After deliberating on the matter for two days, Fianna Fáil leader Micheál Martin accused the Minister of an “error of judgment” and bridled at suggestions that his party was abandoning “mutual understanding and reconciliation” by objecting to the event.

The decade of centenaries to date has been remarkable in the absence of rancour or party political point-scoring. That has ended with the rumpus over this commemoration.

Professor Diarmaid Ferriter of the Expert Advisory Group on Commemorations said they never recommended that there should be a State ceremony for the RIC and DMP.

However, their advice is ambiguously phrased, stating that “consideration should also be given to the organisation of specific initiatives to commemorate the Royal Irish Constabulary (RIC) and the Dublin Metropolitan Police (DMP) and to acknowledge their place in history”.

Prof Ferriter clarified that the expert advisory group only recommended a small number of State ceremonies over the coming years; one to remember the War of Independence, two to mark the coming into being of the State, one for the Civil War and one to remember Ireland’s entry into the League of Nations in 2023 which will end the Decade of Centenaries.

Fianna Fáil Senator Mark Daly said the issue was raised at the all-party group on commemorations in April and “serious concerns” were raised about it.

The committee asked for clarification on how such a commemoration would proceed at their November meeting. “It was our understanding there was going to be another meeting of the committee before the launch, but it didn’t happen. The lack of consultation is a concern.”

Senator Daly said the Government must reconvene the committee if it wishes to proceed on a consensual basis in the remaining years of the decade of centenaries.

Mr Flanagan had hoped that the ceremony would help remember two police forces which have been forgotten about in the public memory. They will be remembered alright, but not in the way that he might have wished.