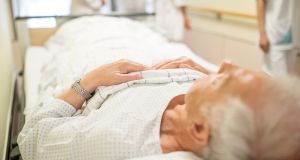 Nurses said 760 patients are on trolleys in emergency departments and on wards queuing for a bed today. File photograph: Getty

Cancelling all planned admissions to hospitals because of overcrowding in emergency departments would not be the appropriate thing to do, Minister for Health Simon Harris has said.

He had heard calls and received correspondence, he said, urging planned operations not go ahead given the pressures on emergency departments and the numbers on trolleys.

“Let me be very clear. No trade union and no politician will decide clinical matters; clinical matters about what is an urgent operation will be decided by, appropriately, clinicians.”

His comments came as the Irish Nurses and Midwives Organisation (INMO) trolley count put the number of patients deemed to require admission to hospital who were left waiting for a bed at record levels for a second day. They said there were 760 patients on trolleys in emergency departments and on wards queuing for a bed .

The INMO said it had written to the Minister seeking the cancellation of planned procedures and the ending of non-emergency admissions to hospitals worst affected by the overcrowding, as part of an overall suite of measures to deal with the crisis.

However Mr Harris responded: “In Limerick on Monday we had 11 operations carried out for gynaecological cancers. Nobody would want to see those time- sensitive operations cancelled.

“We need to get very careful with our language. So cancelling all electives [planned procedures] would not be an appropriate thing to do; these are matters to be decided by doctors.”

“It requires immediate political intervention to stabilise our hospitals.”

“We need to look at paying our consultants more, but also to look at things like 24-hour cover seven days per week. How do we get our discharges up at the weekend? Why do we only see, maybe 100 or 200 people discharged on a Sunday when we see maybe 600, 700, 800 or 900 discharged on other days of the week.”

This move was criticised by hospital consultants who said it would have severe knock-on consequences for patient-health outcomes.

The Irish Hospital Consultants Association (IHCA) said all non-essential surgery had already been cancelled in the main hospitals in Cork since mid-December, “with the decision to postpone remaining essential elective procedures meaning all planned surgery has now been cancelled”.

What do the consultants say?

IHCA president Dr Donal O’Hanlon said: “The decision to cancel all remaining elective surgery at Cork’s acute public hospitals is simply not acceptable. It is forcing hospitals and the consultants who treat patients to determine which patient is more worthy of treatment.”

Mr Harris said it was not a fair analysis to suggest that the overcrowding in hospitals this week was predicable and could have been avoided.

He said nurses and midwives across the country knew that significant additional capacity in terms of beds and staff would be needed in hospitals if overcrowding was to be prevented.

The Minister said the Government is increasing employee and bed numbers. He maintained there are 500 more nurses working in the health service than a year ago. But he said considerable work remained to be done to achieve the required capacity.

Mr Harris said the flu should not be considered a trivial condition. He said capacity constraints in hospitals had been compounded by “a very difficult flu season”. The Minister said more than half of all healthcare staff were still not receiving the flu vaccine.

He added that the number of healthcare workers receiving the vaccine had increased to about 45 per cent, up from 39 per cent. However there was still a long way to go “and it begs the question why more than half of our staff are still not getting the flu vaccine”.