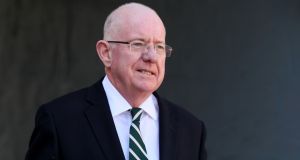 A State commemoration of the Royal Irish Constabulary (RIC) and the Dublin Metropolitan Police (DMP) has been postponed following public and political backlash.

Minister for Justice Charlie Flanagan was forced to defer the ceremony after a number of Ministers, TDs and Fine Gael councillors openly criticised the plans.

Before the announcement, two Fine Gael TDs, Noel Rock and Fergus O’Dowd, said that they would not attend the event which was due to take place next week.

Independent Alliance ministers also said they would not attend the commemoration, and Fine Gael councillors rounded on the organisers in a series of private messages on a party WhatsApp group.

Mr Flanagan said “given the disappointing response of some to the planned event on 17th January, I do not believe that the event, as planned, can now take place in an atmosphere that meets the goals and guiding principles of the overall commemorative programme. Therefore, I am announcing its deferral”.

He said aspects of the event “were grossly misrepresented” and he still intended to proceed with the ceremony later in the year as he believed it is the “right thing to do”.

More than 100 messages were sent on the private WhatsApp group of Fine Gael councillors on the matter, with some complaining that Fine Gael had performed an “own goal” in the controversy around the commemoration, sources have said.

Councillors in the group expressed concern about the political reaction, said the situation was “going down extremely badly”.

Senior Fine Gael TDs reported receiving large numbers of complaints from constituents, with one TD claiming to have received over 50 complaints.

However, there was annoyance within the Fine Gael leadership at the way the controversy escalated. It is understood some Fine Gael Ministers expressed unhappiness with their Government partners in the Independent Alliance over objections to the commemoration which they made public.

Independent Alliance Ministers John Halligan and Kevin Boxer Moran had said they would not attend, while Sinn Féin has called on the Government to scrap the entire plan for a commemoration instead of postponing it.

Mr Flanagan said he would consult further with the expert advisory group on centenary commemoration and with the all-party consultative group on commemoration “with a view to organising an event that is inclusive and fully respectful of all the traditions and memories on this island.”

He added that there were “those in the RIC who committed atrocities.”

“The horrific record of the Black and Tans and Auxiliaries is well known. But there were thousands of other officers who behaved with dignity and honour in serving their communities. And we should not seek to airbrush these people from our history.”

Speaking later on RTÉ, Mr Flanagan said he is “determined that this event will take place” in the future.

Calling on the Government to scrap the plan entirely, Sinn Féin leader Mary Lou McDonald said: “For any Irish government for advocate commemorating these organisations is shameful and it has rightly drawn much criticism.

“Deferral of this planned commemoration is a step in the right direction, but it’s not enough. This event needs to be cancelled.”

Earlier Historian Professor Diarmaid Ferriter said the expert advisory group on commemorations never suggested there should be a State event for the Royal Irish Constabulary and the Dublin Metropolitan Police.

He took issue with a statement by Mr Flanagan who said on Monday that the proposed State commemoration was made “under the guidance of the expert advisory group on centenary commemorations”.

Mr Flanagan had responded to the mounting furore over the commemoration event on January 17th in Dublin Castle by stressing that it was never intended to honour the Black and Tans and Auxiliaries too.

He added: “This event is one of a large number of events taking place during this decade to acknowledge and commemorate significant events or developments in the history of our island one hundred years ago.

“It is not a celebration. It is an acknowledgement the historical importance of both the DMP and the RIC, and is in no sense a commemoration of the Black and Tans or the Auxiliaries.”

Professor Ferriter said the advisory group, which comprises of himself and other professional historians under the chairmanship of Dr Maurice Manning, did not recommend that a service for the RIC and the DMP be included in the list of State commemorations.

In a statement on Tuesday, Fianna Fáil leader Micheál Martin criticised the Government’s handling of the event.

“In my view, the event organised by the Minister for Justice is not the appropriate vehicle to explore such complex themes.

“It was an error of judgement compounded by the Taoiseach and the Tánaiste and their reaction to those who have decided not to participate.

Mr Martin said that Mr Varadkar and Mr Flanagan should withdraw their accusation that those who choose not to attend this event are abandoning “mutual understanding and reconciliation”.

In a series of tweets on Tuesday Taoiseach Leo Varadkar defended the Government’s stance.

Mr Varadkar said the RIC/DMP commemoration “is not a celebration. It’s about remembering our history, not condoning what happened. We will also remember the terrible burning of Cork, Balbriggan, partition and the atrocities of the Civil War.”