Over 620 people on trolleys or wards awaiting a hospital bed 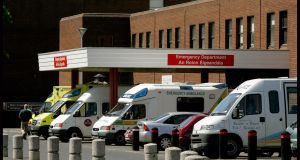 The HSE said in a written parliamentary answer that the full capacity protocol had been invoked 199 times last year at Cork University Hospital and 150 times at Beaumont Hospital in Dublin.

Hospitals across the State implemented their highest level measures for dealing with emergency department overcrowding – known as their full capacity protocols – on hundreds of occasions last year, official figures show.

Under these measures additional patients are moved onto wards and hallways outside of emergency units and elective admissions to the hospital can be cancelled.

The HSE told Sinn Féin health spokeswoman Louise O’Reilly that the full capacity protocol was the last stage of escalation under a national framework issued in 2015 to hospitals to deal with overcrowding.

The HSE said in a written parliamentary answer the full capacity protocol had been invoked 199 times last year at Cork University Hospital and 150 times at Beaumont Hospital in Dublin.

Nurses said on Tuesday that there were 621 patients on trolleys in hospital emergency departments and on wards awaiting admission to a bed.

The number of patients on trolleys in emergency departments or on wards awaiting admission to a bed has spiked again in recent days, reaching 643 on Monday. The HSE has attributed the rise in trolley numbers in part to a longer-than-anticipated flu season.

Dr Chris Luke, a consultant in emergency medicine at Cork University Hospital, said the past week or so had been one of the busiest periods he had encountered at the hospital.

He linked the growing numbers of people on trolleys in emergency departments to the fact that people were living longer and required more complex care.

“I don’t know why it’s particularly bad in Cork at the moment but conditions are absolutely appalling – there seems to be an awful lot of sickness about and while there are cases of flu and norovirus, it’s not particularly due to those,” he said.

“Twenty years ago, most people came to the A&E with just one or two problems, now we have dozens who are over 70 with half a dozen problems so it’s their bowel, their heart, their lung, their joints and they are often on eight or nine or 10 medications so it’s so much more complicated.”