What’s going on with the Luas? Commuters complain at overcrowding

Travellers complain over packed trams on Monday and Tuesday 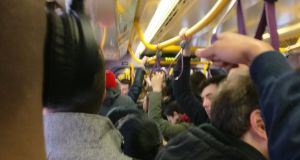 Inside the Green Line service to Sandyford on Tuesday morning at approximately 8.15am. The picture was taken and posted on Twitter by @mahooneys who said passengers could not get on the tram at most stops past Charlemont

Luas commuters have been left angered by packed morning time trams as the service struggles to deal with a series of ongoing problems.

Hours after significant delays on Monday evening, travellers on Tuesday morning were using social media to chronicle what now appear to be routine problems with the network since its extension last December.

Difficulties seem more severe on the green line although service updates on the Luas website reported both red and green line services were working as normal on Tuesday morning.

Addressing the Luas operator, one commuter wrote on Twitter: “Thanks for your contribution to more grumpy and aggressive people first thing in the morning. No more excuses, it’s beyond a joke. And bugger off with your ‘please move down the tram’ announcements, the bloody thing is packed.”

It a period of serious concern for transport officials and politicians in the capital, where services like the Luas, and particularly with its much vaunted Cross City extension, are viewed as the future of city travel.

Officials from Transdev, the service operator, are now expected to be summoned before the Oireachtas Transport Committee to address concerns.

On Monday evening, customers were warned of “line wide” delays averaging 20 minutes on both the green and red lines, but with no explanation as to why.

There were more complaints on social media about the lack of intercom announcements and trains not turning up at stations.

“Are the delays for the whole evening? When are you hoping for normal resumption of service? Should I just go for the bus? The tweet is too vague,” said one exacerbated customer.

Another responded: “Hardly need to tell us to expect this anymore lads, par for the course since January really!” Others were calling on Transport Minister Shane Ross to take action.

Luas passengers are given certain commitments from the operator, including that real-time passenger information is available at stops “99 per cent of the time” and that a “99 per cent reliable service” is also provided.

In a statement on Monday, the operator said there had been problems following the extension of the green line to Broombridge, due to the “availability of trams and high passenger numbers at peak times”.

On both Sunday and Monday evening the Luas informed passengers there would be short delays for commuters travelling on the green line.

Green Party deputy leader Catherine Martin said she will formally request the Transport Committee invite Transdev officials before it to address service problems and their impact on frustrated commuters in the city.

“Commuting at peak times is currently a nightmare for Luas passengers due to overcrowding, delays, repeated failures of the real time information displays and debit card machines” Ms Martin said.