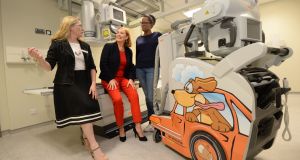 The chief executive of Children’s Health Ireland (CHI) has called on the Government to address pay inequality for doctors, saying the issue of people doing the same work for different levels of pay “needs to be addressed”.

Eilísh Hardiman was speaking in advance of the official opening of the children’s urgent care centre at Connolly Hospital in Blanchardstown, Dublin. The new facility has been forced to curtail its opening hours after it failed to attract any applications for two of five radiology posts.

Ms Hardiman said pay restoration is “a national issue, and a process needs to commence on it”.

“It needs to be addressed. [It] absolutely needs to be addressed. You can’t have people on the same team paid different rates doing the same work,” she said. CHI began recruiting for the posts in the first quarter of this year. It had 18 applications for four posts in general paediatrics, but the radiology jobs have proved more challenging to fill.

“Nationally there is a challenge around the restoration of pay, that is a challenge because we are in a global market. That is one issue that we can’t solve, but we have raised it and escalated it with the HSE and on to the Department, as a policy issue that needs to be addressed,” Ms Hardiman said. Her remarks represent a strengthening of tone from the children’s hospital group, which previously confined itself to observing that pay restoration is a national policy matter for the Government.

Minister for Health Simon Harris said in April that a process around pay restoration would be commenced, but no visible progress has been made on the matter since then.

Opening hours for the new facility were cut back after consultants expressed concerns regarding risks attached to opening the new facilities with some posts left unfilled. CHI had initially said the urgent care centre, the first of its kind in the State, would open between 8am and 6pm. This was further curtailed following a meeting between CHI management and hospital consultants.

Dr Ciara Martin, clinical director and paediatric executive lead at CHI, said she could not give a time frame for the expansion of hours and services at the centre. “I don’t know if someone is going to apply next week [for the unfilled posts]; we have agencies looking for people and we’re working on a day-to-day basis”.

The state-of-the-art facility at Connolly has been designed to alleviate pressure on other children’s hospitals in the capital such as Temple Street and Crumlin, to provide an alternative to parents who would usually attend the emergency departments at the main children’s hospitals. It is hoped that the facility will also bring down paediatric waiting lists.

Among the facilities at the urgent care unit are isolation rooms for children with contagious diseases and multisensory rooms for autistic children or siblings of patients. Rooms are also larger than in other children’s facilities, and designed with families’ interests in mind.

Earlier this week, paediatric radiologists at Temple Street expressed concern that if resources were diverted to the new facility at Connolly it would lead to increased waiting times for children in their own hospital. Ms Hardiman said yesterday she was “aware that there are risks with waiting times in Temple Street; we’ve actually secured NTPF [National Treatment Purchase Fund] funding, and we will be doing an initiative to try and reduce that risk.”

CHI said its intention is to open seven days a week eventually, between the hours of 8am and 8pm. Once fully operational, the facility is expected to provide 17,000 outpatient appointments a year.