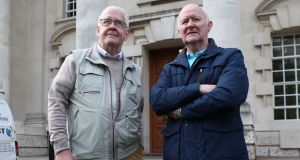 Francie McGuigan and Liam Shannon, two of the Hooded Men. ‘History has proven me right,’ Mr McGuigan recalls in the documentary, which is to be broadcast on TG4 on Wednesday

The failure of the European Court of Human Rights to uphold a ruling of torture against the British government early in the Troubles “opened the door for governments throughout the world” to torture suspects, one of the so-called Hooded Men has claimed.

Francie McGuigan, one of the 14 Hooded Men arrested in August 1971 at the time of internment, made his claim as the group’s lawyers continue to press for an investigation to establish that what they experienced constituted torture.

Mr McGuigan and Liam Shannon, another of the Hooded Men, recount how they were still suffering from the interrogation techniques they were subjected to more than 48 years ago in the last episode of the documentary series Finne, which is to be broadcast on TG4 on Wednesday at 9.30pm.

In the documentary, Mr McGuigan and Mr Shannon recall how they and the other Hooded Men were subjected to the so-called five techniques method of interrogation for a week at a British army base in Ballykelly, Co Derry. These were hooding, prolonged wall-standing, subjection to white noise, sleep deprivation and deprivation of food and drink.

The Irish government in 2014 made an appeal to the European Court of Human Rights seeking to have the original torture judgment upheld but that appeal was rejected.

Mr McGuigan recalls in the documentary how after the judgment was amended to “inhuman and degrading treatment” he spoke at a press conference where he said that “Europe had made an awful mistake”.

“They have now opened the door for governments throughout the world to take ‘Seán Citizen’ off the streets and out of his bed and torture him and call it degrading and inhuman treatment,” he said.

“History has proven me right. We have got Guantánamo Bay, we had Abu Ghraib, and what happened in black sites – people have been tortured all over the world. Europe had a marvellous opportunity to help eliminate that.”

Kevin Winters, solicitor for a number of the men, said that following a Belfast Court of Appeal ruling last year, the men were pursuing the case on a number of fronts. The court found that there should be a police investigation into the alleged torture of the men, nine of whom are still alive.

Lord Chief Justice Sir Declan Morgan said the treatment of the men “would, if it occurred today, properly be characterised as torture”.