Centres are springing up in Connemara, Gweedore and other remote places 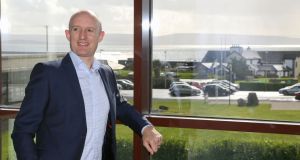 Daragh Molloy might work in Ireland’s most spectacular office. Looking out from his desk in Furbo, Connemara, you can see Galway Bay stretched out, with the Aran islands filling one edge of the window and the hills of Clare on the other.

Molloy, an app developer, spent nine years working in Dublin and a number of other European cities. By 2017 he decided that he had had enough and moved home to Galway in search of a new job and a new way of life.

Once there, he established Tadco, an app development and software design company. For much of the past two years he searched for a long-term home for the company, complete with the ultra-high-speed internet needed for it to work.

Tadco is one of the first companies to have taken up residence in the gteic hub in Furbo, one of a number of hubs pioneered by Údarás na Gaeltachta.

From there Molloy and colleagues manage clients across Ireland and the UK, while working hand in glove with Indian-based developers. And all of this with a commute of less than five minutes.

“It is a fantastic area to live in and work in. I’m standing here, looking out over the Aran islands, a beautiful flat bay in front of me. There are not many offices in Ireland that can offer you that,” he says.

“I worked overseas for three years, and in Dublin for six. I’ve done the fast-paced city life. I always wanted to come home. I knew that if I was lucky enough to start a family, that I wanted them to grow up in Galway.

“Here, I jump in the car after work, and five minutes later I’m home. One of the cool things about gteic is that, as it grows [people] collaborate, draw on each other’s expertise and grow together. That’s the beauty of it.”

The hubs are spreading. On Friday, Minister for Rural Development Michael Ring opened a gteic in Spiddal, the first one to be directly funded under the Ireland 2040 Rural Regeneration and Development Fund.

Spiddal brings the number of Údarás hubs to nine. By the end of 2020 there will be 31. “Some will have have 50 or more seats, and then we have somewhere like gteic Carna, which has eight seats,” says Micheál Ó hÉanaigh of Údarás na Gaeltachta.

Gweedore, Co Donegal, has become a hub for high-tech workers. In 2000 Pramerica Services, a subsidiary of Fortune 50 company Prudential Financial, set up in Letterkenny. It now employs 1,800.

Up to 25 work remotely from Gweedore every day. “Gweedore is a big part of our strategic plan for the future. We have strong academic partnerships with [Letterkenny Institute of Technology], Donegal ETB and Údarás na Gaeltachta,” says David Roche, director of fintech services and head of corporate social responsibility with Pramerica. “So moving into gteic ticked all the boxes for us.”

“We continue to engage with the wider community in every way, but in particular by promoting opportunities to help our employees sustain a work-life balance by being flexible and innovative,” he says.

Some work permanently from Gweedore. Some do so a few days a week. “When we are dealing with our colleagues and businesses in the US, they could be on the 15th floor of their building and they look at us as if we are on the floor above or below them,” says Roche.

For Údarás, the hubs are key to the future, “ensuring that rural communities and offshore islands have access to good-quality office space and reliable connectivity,” said Micheál Ó hEanaigh.