Q&A: Why is Ireland failing to meet its environmental targets? 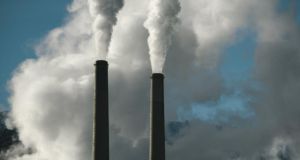 The latest EPA figures confirm that Ireland’s carbon emissions are rising, with no indication of how the trend will be put into reverse. Photograph: Brandon Thibodeaux/New York Times

This week it was confirmed that Ireland has – yet again – missed its targets for reducing greenhouse gas emissions. No one was surprised.

Ireland has pledged to reduce emissions to 20 per cent below 2005 levels by next year – the 2018 figures show they will in fact increase.

Ireland has a notorious and long-established record, encapsulated in emission figures that don’t lie

Missing targets matters and from next year it will come with a cost: hundreds of millions a year in fines for not living up to our promises to the EU.

Here we examine the key failures that have seen Ireland fall behind its carbon emissions cut plans – and the disconnect between the promises from those with political power and their subsequent actions.

Why is Ireland missing its carbon emissions targets?

Ireland has a notorious and long-established record, encapsulated in emission figures that don’t lie. The latest Environmental Protection Agency (EPA) figures confirm the trend; we are on a trajectory of rising emissions with no indication of when it will be stopped and put into reverse – in spite of commitments made on the global stage to do so.

The figures show the biggest failures are in the transport and agriculture sectors, which in the verdict of Maynooth University climatologist Prof John Sweeney have not tackled emissions sufficiently. That means “business as usual”.

The poor decisions that got us here

Decades of government inaction, slow pedalling on agreed actions, too much pandering to the fossil fuel industry and individual TDs wrapping themselves up with the comfort blanket of climate science denialism (now in tatters) all played their part.

Short-termism, meanwhile, continues, its grip tied into the electoral cycle, so following or reacting rather than leading is politically prudent and the norm.

The wrong decisions, where action was hopelessly slow or inadequate, are becoming glaringly obvious: here are four examples.

1. Failing to switch to vehicles that pollute less

Ireland has a dispersed population in a rural context and that poses enormous logistical difficulties – but they are solvable with a bold approach.

In our cities the absence of an efficient public transport infrastructure that shifts the balance away from private car use stands out.

Cities are hopelessly congested while cycling and even walking options are at best limited or at worst dangerous.

Irish politicians missed the boat on car tax, Sweeney notes. Amazingly, car road tax was at one time based on emissions. The bands were changed, which encouraged people to trade up and buy SUVs and gas guzzlers, mostly reliant on diesel. At the same time there was no increase in incentives to buy smaller, less carbon-polluting vehicles.

Electric vehicle sales are are at last rising, though from a very low base. However, Ireland’s infrastructural limitations mean the country is not geared up for a huge switch to electric vehicles by 2030.

2. Agriculture and the great mantra of expansion

Ireland’s emissions problem is most pronounced in agriculture. In essence, we export 90 per cent of agri-foods, achieving a remarkable level of production underpinned by quality.

Yet the sector is responsible for a third of overall emissions, notwithstanding carbon efficiency compared to its competitors abroad.

But expanding our core agriculture products – beef and increasingly dairy – without sufficient acknowledgement of climate impact, which was fuelled by the ending of milk quotas, is delivering a harsh payback which can no longer be avoided.

A roadmap generated by Teagasc, now a central element of the Government’s climate action plan, may be in place but Sweeney insists there is nothing on the ground indicating a changed direction. What’s more, agricultural emissions are likely to increase for the next five years.

Overriding this is the huge question of how best to use land that accommodates agriculture, afforestation, and bog restoration to capture carbon, bioenergy and nature-based solutions.

The Teagasc plan on its own will not be sufficient to deliver food in an export-led country with a growing population, and at the same time decarbonising across all sections of the economy and society. Developing a national land-use plan (and swiftly) is the best way to break this impasse.

The other trend going in the wrong direction are emissions associated with buildings – homes in particular – where fossil fuels are the dominant heat source and poorly designed houses compound matters because they are so energy inefficient.

In planning terms, the introduction of higher building standards was far too slow, while “the single-house syndrome” evident in much of rural Ireland has been allowed to continue with obvious consequences in terms of commuting (with little or no public transport available) and emissions.

Ireland has dithered spectacularly over carbon taxes. Endless discussions about how to apply them and at what scale annoys Sweeney, as he believes it’s just one small part of the decarbonisation puzzle – albeit an essential one.

Our poor emissions performance to date means we will have to go beyond €80 per tonne of CO2 by 2030, and in fact should be accelerating increases now, in spite of the inevitable political fallout.

Ireland’s economic boom is largely tied into fossil fuel usage, while other progressive countries are trying to break the link

Budget 2020 saw more evidence of politically-based decisions on a minimal “don’t scare the voters” change, with a €6 per tonne increase in carbon tax.

All told, this adds less than 2 cent to a litre of petrol or diesel (as announced in Budget 2020).

A change at this level will have almost no impact on consumer behaviour.

A benign tax regime has allowed Ireland’s economic boom to roar on, one that is largely tied into fossil fuel usage, while other progressive countries are trying to break the link.

Current Government policy is to rely on fossil fuels, notably gas, up to 2050 as the country decarbonises.

So what level of fines does Ireland face for its rising emissions?

Existing estimated costs for purchasing compliance for these combined targets range from a total of €230 million to €610 million.

In the case of emissions failures, the cost could be several hundred million euro.

What should Ireland be doing?

Political failures will cost us all dearly and are more galling because the necessary changes will be good for our society and economy, Green Party leader Eamon Ryan insists.

It is hard to disagree with the view that every sector is following a business-as-usual model, which is the underlying reason why our emissions continue to rise.

The EPA in its latest evaluation says, however, the climate plan is “a big game changer” though it underlines the need for swift implementation.

Minister for Climate Action Richard Bruton displayed a rare brand of political frankness in admitting the latest figures were “bad”, but listed significant changes in accelerating renewables, scaling up of electric vehicle infrastructure and on retrofitting homes (starting with those in fuel poverty).

“But this is something we need to spread much more widely, and we need to get every sector of our economy making the changes,” he said.

In Sweeney’s view, a “Marshall Plan” approach is required.

That means polluters in all sectors must pay and public transport must be rolled out on a grand scale – including using taxes to subsidise free public transport. That inevitably means, for instance, restricting car access to central Dublin and congestion charges within the canals.

In that context, he believes the Government’s climate plan is “wholly inappropriate” to achieve net-zero emissions by 2050.

In short, Ireland’s ambitions have to be jacked up. In any event, failure to do so will be forced on Ireland under the Paris Agreement. What’s more, the EU is pushing for even more demanding targets for 2030.

The big message is unequivocal – Ireland is not doing enough to ensure a sustainable future for its citizens and to make a meaningful international contribution to arresting global heating.

New governance changes, backed by strong legislation, have the ability to ensure rigour in moving to a better place and there is unprecedented public engagement and willingness to take action.

But it has to be made easier for people, whether it’s changing their daily commute, deploying microgeneration, buying an electric vehicle or reducing food waste – actions that can help make a difference and achieve big buy-in.

And Ireland’s politicians have to stop putting off decisions and actions.