Weather warning in place as temperatures set to dip below zero

Rainfall warning in place for southern and southeastern counties until Saturday 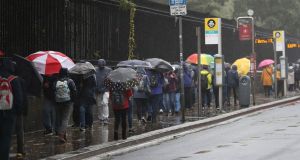 Heavy rain is forecast in parts of the country on Friday night and Saturday morning. Photograph: Nick Bradshaw

A status yellow rainfall warning is in place for parts of the country on Friday and Saturday morning, with temperatures expected to reach as low as –1 degrees overnight.

Met Éireann has issued the status yellow alert for counties Carlow, Kilkenny, Wexford, Wicklow, Cork and Waterford, which is in place until 6am on Saturday.

The forecaster said there will be “pulses of heavy rain” on Friday and overnight and some spot flooding, with rainfall totals of between 25 to 30mm. Conditions will become drier and cooler from Saturday afternoon.

Rain will be widespread across Munster, Leinster and east Ulster on Friday, with heavy showers in some south and southeast areas and some spot flooding.

Friday night will see further rain over east Leinster and much of Munster, with heavy rain especially in coastal areas.

It will be cold and mostly dry elsewhere with some frost and mist in places.

Temperatures will drop to between -1 and 5 degrees overnight with light variable breezes.

Rain in the east and southeast of the country on Saturday morning will clear and it will be a “bright, breezy and fairly sunny day”, according to Met Éireann.

Some showers will develop in the northwest, with an isolated hail shower also possible. Highest temperatures will be between 7 and 10 degrees.

Conditions will turn cold overnight with some showers over Ulster. Lowest temperatures will be between -1 and 3 degrees, with frost forming quite widely. It will be coldest in the southern half of the country, with a risk of a few icy patches.

Sunday will be a mostly dry, bright and sunny day with the odd light shower on the north coast. Highest temperatures will be between 9 and 11 degrees, in light to moderate north to northwest breezes.

It will be cold and frosty overnight, with lowest temperatures of between -2 and 2 degrees and some icy patches possible.

Met Éireann said early frost will clear to give a dry, bright sunny morning. There will be further sunshine on Monday afternoon but cloudy periods also. Highest temperatures will be between 9 and 11 degrees in fresh and gusty east to northeasterly winds.

It will be cold over the northern half of the country overnight with some frost in places.

Met Éireann said there is “a lot of uncertainty” with regards to the run into the middle of next week. “Some wet and windy weather is indicated, but there is a chance that the drier, colder weather may hang on,” it said.