DUP annual conference: Time to get out the woolly hats for winter election canvassing? 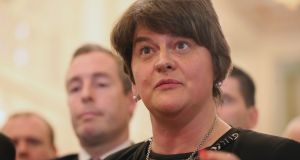 Arlene Foster and her DUP MLAs leaving the chamber of Stormont Parliament buildings in Belfast on Monday as an attempt to restore devolution to Northern Ireland fails. Photograph: Niall Carson/PA Wire

Politicians have different views on the DUP leader but surely many would feel just a modicum of human sympathy for Arlene Foster as she is about to address hundreds of delegates at her party’s annual conference in south Belfast this Saturday afternoon.

For many years these gatherings, especially when Ian Paisley and Peter Robinson were in their pomp, weren’t so much conferences as high-flown, flag-waving, rollicking, barn-storming, triumphant unionist rallies.

There isn’t much to rollick about or to feel triumphant about today, however, and Foster knows that.

She will be taking to her feet in the Crowne Plaza Hotel close to the river Lagan at a time when Boris Johnson appears content to shaft the DUP over Brexit, when Stormont is mothballed and Westminster is bringing in controversial legislation such as liberalised abortion over the heads of Northern Ireland politicians, the cash for ash inquiry report is looming, and the DUP could be facing a very daunting general election – especially if it coincides with that renewable heat incentive (RHI) scheme inquiry report.

At this conference Johnson’s attempt to get an election on December 12th, like a hanging, will concentrate minds. And who wants to go knocking on doors in the bleak mid-winter?

At least one party source had the energy to joke that it might not be the usual little union flags that will be handed out to delegates, but woolly hats for hard winter election canvassing.

It all seems so far away from a year ago when Johnson, then in pursuit of the British prime ministership, was Foster’s warm-up act at the same conference at the same venue, warning about the backstop turning Northern Ireland into “an economic semi-colony of the EU”.

In the meantime Johnson as prime minister has forged a new deal with the EU that some unionists feel creates a border down the Irish Sea and hence does make Northern Ireland “an economic semicolony of the EU”.

Foster has to navigate all those issues and invigorate the party for what they know will be a difficult election and, if Johnson gets his way on Monday, at an awful time.

Foster may speak about the abortion legislation more in sorrow than in anger and tell delegates that if the Assembly and Executive are ever restored repealing or amending that law will be top of the DUP agenda.

But if even possible that would require Stormont to be sitting. And amid the current uncertainty and acrimony, DUP delegates – the few of them that would make an occasional punt – won’t be placing bets on that happening any time soon.

Foster nonetheless will have to create some sense that all hope is not lost as regards Stormont. What might help would be a promise or a strong signal that the DUP would sign up to an Irish language Act, the issue still seen as key to unlocking the door to a deal.

But a conference close to the eve of an election may not be the time for such commitments, or even hints of such possibilities.

Last year Foster expressed a number of acts of contrition over the calamitous RHI eco-heating scheme that could cost the Northern Ireland taxpayer close to half a billion pounds. Her private prayer this year may be that somehow Judge Patrick Coghlin’s report into the scheme won’t be published ahead of the general election, should it happen in December.

There is still no word on an official date for the report although some have speculated it could be out before the end of November, which would not be good for the DUP. Foster may be inwardly hoping that Jeremy Corbyn funks the December election offer from Boris.

It was the DUP’s 10 MPs who through a confidence-and-supply agreement with the Tories, complete with £1 billion payback, kept the British government in power.

If the election is another close-run-thing then Johnson might welcome DUP support in the next British parliament, notwithstanding the current bad blood between the Conservatives and the DUP. But after the coming election the party might not have 10 MPs to provide buttress.

The DUP faces real challenges in South Belfast, North Belfast and East Belfast, and while it is unlikely to lose all three seats, its representation could drop.

To lift the faithful, Foster and Nigel Dodds, and possibly Sammy Wilson if he is allowed put on his verbal boxing gloves, are likely to engage in diversionary tactics by punching at the likes of Leo Varadkar, Simon Coveney, Sinn Féin, the SDLP, Alliance and some fellow unionists.

Unionists will be warned that if they don’t stick with the DUP they will play into the hands of Sinn Féin, and thus create a greater push for a Border poll on a united Ireland.

Whether in December or early next year it seems there is little doubt that a Westminster election is reasonably imminent, and Foster’s big job today is to engender some enthusiasm for that test, regardless of all the self-created bad political karma swirling around the party.

Covid-19 patients in hospital remain at high levels as lockdown extension expected 11:58
Everyone in Ireland to get Covid-19 vaccine by September, Minister for Health says 11:54
Inspector who highlighted mother and baby homes to be remembered through scholarship 11:07
Mandatory travel quarantine should be introduced by Ireland, experts urge 09:58
Temperatures set to plunge to -4 degrees, bringing risk of snow 09:01