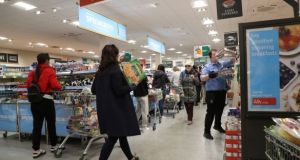 Some retailers that have been allowed to keep trading during the current period of coronavirus restrictions are being told not to sell greeting cards, magazines or wreaths amid confusion over how the rules are applied to individual shops.

Vincent Jennings, chief executive of the Convenience Stores and Newsagents Association, said there was a grave inconsistency in how the measures aimed at halting the spread of the disease were being applied.

He said some shops had been told they could not sell magazines, stationary, books or flowers while others were allowed to sell them without comment from the authorities.

“The central purpose of the rules appears to be to take out the browsing element and reduce the dwell time in shops,”he said. “I can walk up and down the aisles of Tesco or Aldi and spend as long as I want there but I can’t look at flowers in a local shop or buy that most seditious of things – a book in newsagents.”

Mr Jennings said this “high level of inconsistency” was not fair for businesses trying their best to keep going.

“How am I supposed to tell my members that they can’t sell a greeting card or a wreath to put on a grave?” he asked.

Damien English, the Minister of State for Retail Businesses, came under fire on Friday after telling RTÉ’s Prime Time on Thursday night that children’s clothes were not essential items.

When asked by presenter Miriam O’Callaghan why it was possible to “buy a bottle of wine, but not socks for my son”, Mr English responded that “socks come under clothes, Miriam. Clothes are not essential”.

Social Democrats TD Gary Gannon said he believed Mr English had “let himself down” with the comments. Mr Gannon said clothes were essential and he pointed out that during the lockdown in March, April and May, supermarkets were able to sell clothing alongside food and other essential items.

Arnold Dillon, director of Ibec body Retail Ireland, drew a distinction between the first and second lockdowns. He said what retailers were permitted to sell had grown in importance over the course of the current period of restrictions as fears grew about “the ability of many businesses to survive”.

“The run-up to Christmas is the key trading period of the year and many retailers are relying on it to recoup losses incurred during the first lockdown.”

Mr Dillon said that the restrictions imposed on retailers now “are less severe than those earlier in the year” and this had created some additional confusion.

“We need a consistent approach to enforcement across the country.”

Taoiseach Micheál Martin told reporters that people could still buy online or use click-and-collect services offered by some retailers.

He said the Level 5 restrictions had to “include instruments to reduce congregation of people, reduce gatherings of people in shops and in other locations” in an effort to bring down the number of people infected with the virus.

Minister for Finance Paschal Donohoe said context was important in the debate and that if large retailers were allowed to sell clothes while smaller retailers were forced to stay closed, it would become a bigger issue.

He told RTÉ’s News at One that “to be fair to all retailers, particularly small- and medium-sized retailers who do sell clothes, we do need to have a level playing field in relation to the definition of non-essential goods”.