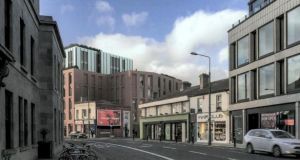 An impression of the proposed development in Donnybrook, Dublin 4

Serious concern has been expressed by Dublin City Council planners about the size of bedrooms in a 100-bed co-living development in Donnybrook, Dublin 4.

The seven-storey proposed development, which involves the demolition of the well-known rugby pub Kiely’s, has faced objections from 115 quarters.

The council has now put the plan on hold after requesting that the developers, Westridge Real Estate, lodge revised plans, including lower building heights.

The council said it has “serious concerns” about the size and scale of the current proposal and the impact it would have on single-storey cottages to the north of the site.

Questioning bedroom size, the planners’ report acknowledges that the bedrooms exceed the minimum size, but some would be no wider than 2.5m.

The report said their size should be increased. “This is especially relevant during the current Covid-19 pandemic where social distancing is now part of daily life,” it said.

Shared living on this scale causes concern, the planners noted. Construction of the development is forecast to be completed in three years’ time.