Has social media led the world to lose its hold on reality?

The Questions of the Year, including - was Leicester City's triumph a bad omen? 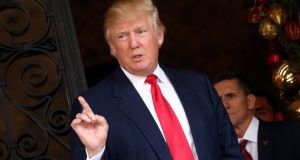 “Fake news” was widely cited as a factor in the election of Donald Trump in the United States. Photograph: Carlos Barria/Reuters

Has social media helped the world lose its their hold on reality?

For years, there has been speculation about how the online world and the real world, for so long considered separate domains of human activity, would affect the other. What aspects of online interaction, we wondered, would bleed in to our real-world relationships?

This year we really began to find out, and it wasn’t like anybody predicted. Social media, in particular Facebook and Twitter, had a profound impacts on the real world in 2016, with disastrous results.

Twitter’s harassment problem and instant outrage mob culture has led to a bombardment of indignation and confrontation that has desensitised us in a profound way.

The impact of Facebook is even more insidious. With so many people relying on their newsfeeds to get their news and current affairs, the long-waning power of the mainstream media to act as a gatekeeper to the public’s understanding of the world is being fatally undermined.

In the newsfeed, all news sources resemble one another, meaning they all have the same “credibility” for the average reader. With people more likely to click on and share stories that confirm their existing biases, and with circles of friends likely to share more of those biases, a filter-bubble effect has become extremely pronounced, with people less likely to see news that contradicts or challenges their worldview.

Quite apart from the proliferation of so-called “fake news” that this incentivises, and which was widely cited as a factor in the election of Donald Trump, this corrodes the sense of a commonly accepted version of reality.

What were once widely agreed-upon facts are now open to “debate”. Reality itself becomes a partisan game of “he said, she said”. Climate change becomes the new evolution, merely another theory to be disputed. Opportunists thrive in an environment where they aren’t accountable to facts or accuracy.

Such massive disruption to the dissemination of information was bound to have dramatic social effects. This year, we found out exactly how dramatic those changes can be.

Was there any great sport this year?

When the real world is turbulent and unpredictable, we tend to turn our attention to the world of entertainment for diversion and distraction. Neither cinema nor music served up anything that really caught the public imagination, never mind capture the spirit of the age, so it was to the sporting arena we had to pin our hopes.

Unfortunately, for a year with both an Olympiad and a European Championship, 2016 was not a classic.

The lavishly expensive Olympics, against the striking backdrop of Rio, served only to highlight how out-of-touch elite sport has become. That it will be remembered more for swimmer Ryan Lochte’s drunken antics and Patrick Hickey’s early-morning hotel arrest speaks volumes for the standard of entertainment. Not even the O’Donovan brothers and Annalise Murphy could entirely salvage the dubious defeats of Michael Conlan and Katie Taylor.

France hosted Euro 2016, and the Irish fans offered more entertainment than most of the soccer on display, with Robbie Brady’s header against Italy a genuine highlight, along with Iceland’s hilarious elimination of England days after the Brexit vote. But the tournament never took off, and an average Portugal side prevented France from enjoying what would have been a cathartic triumph.

The 2016 conversation might be rather different had Mayo managed to defy the curse of 1951 and overcome an underwhelming Dublin in that first All-Ireland final, but a flurry of own-goals undermined their committed display.

Instead of giving us a fairytale, Cillian O’Connor’s last-gasp missed free in the replay merely confirmed that the Dubs are emerging as a hegemonic power in football. The hurling championship, on the other hand, was far from memorable, with Tipperary lasting longest after a distinctly ordinary summer’s hurling to claim the Liam McCarthy.

It was arguably only Leicester in the English Premier League who caught the imagination, surmounting 5,000/1 odds, not to mention an array of expensively assembled rivals, to swash and buckle their way to one of the most improbable sporting triumphs ever.

However, in a year of Brexit and Trump, Leicester’s unlikely triumph now resembles a sort of sporting augury, a hint that the natural order of things was about to be upended. Less a fairytale, then, and more a symptom of an unsettling surrealism.