20 years after being assaulted in Ireland as a 17-year-old Italian student, Guido Nasi, was welcomed to Áras an Uachtaráin by President Higgins. 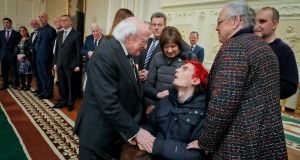 President Higgins meets Guido Nasi from Italy, who was attacked on holiday in Ireland 20 years ago. Photograph: Tony Maxwell

Twenty years after an attack in Dublin left him severely disabled and in a wheelchair, Guido Nasi arrived at Áras an Uachtaráin to be welcomed as the embodiment of “forgiveness and courage”.

President Michael D Higgins addressed a reception for the Irish Tourist Assistance Service (ITAS), the organisation that had come to Mr Nasi’s aid, but the focus of the day was squarely on his enduring relationship with the country.

“His presence here is an indication of the almost infinite power of forgiveness and of courage and of resilience and of hope and belief in the human spirit,” the President said, straying off script and addressing the Italian directly.

Flanked by his mother Simonetta in the State Reception Room, Mr Nasi’s life was inexplicably altered in a few short moments in Dublin’s Fairview Park on a July night in 1999.

James Osborne, the 31-year-old who smashed a beer bottle over his head, was sentenced to eight-and-a-half years in prison. Mr Nasi told the court his experience was “a nightmare from which I try to wake myself”.

Nevertheless, his love of Ireland has continued, a spirit widely praised during his fourth visit here over the weekend, culminating in the Presidential ceremony on Monday.

“There were many people in Ireland who shared that heartbreak [OF THE ATTACK]but also who have been humbled by the sheer force of the forgiveness and love,” Mr Higgins remarked.

He drew heavily on the theme of hospitality – as exemplified in the work of the ITAS now celebrating its 25th anniversary – and its small part in Mr Nasi’s story.

“There is nothing more important than giving a practical definition to hospitality, than reaching out to those who are upset and frightened and distressed; ensuring that they are supported and assisted in reporting the crime,” the President said.

Outside the Áras, Mr Nasi said a few words through his translator, saying he was “really proud to be here”.

“What happened to Guido could happen to anyone in any country in the world. It wasn’t exceptional,” explained his Irish translator Bernadette Kelly who has been helping the family since the night of the attack.

“But what was exceptional was the reaction of the people and how everyone treated him. And [HIS MOTHER]said you can’t judge the whole country by [the actions of] one person.”

Ms Kelly went to Beaumont Hospital to help Simonetta Nasi communicate with gardaí “and realised I couldn’t walk away”, she said, recalling the language barrier with medical staff. It is illustrative of the vital service provided by the ITAS.

Ms Nasi wanted to tell the story of a teenage girl who died in hospital on the same night her son was admitted to emergency care.

“Her mother didn’t leave when this girl died,” Ms Kelly explained. “She waited for Simonetta . . . and gave her a hug and spoke to her. Although she couldn’t understand a word she knew the woman was trying to comfort her.”

As an organisation, the ITAS has come to embody this response to foreign victims of crime. It helps with everything from stolen credit cards to the most horrific trauma. Over 17,000 people have benefitted since it began its work in 1994.

Its founders Ann Meade and Derek Nally were also recognised at the reception.

“To me, one crime against a tourist was sufficient to have a service that could deal with it,” Mr Nally told The Irish Times.

“It’s associated with a feeling we have with people generally, Ireland of the welcomes. The fact that we have this service is evidence of that.”