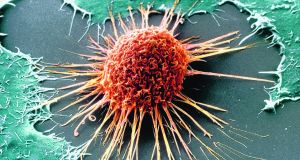 A cervical cancer cell. The RCOG has been tasked with reviewing the screening history of women with cervical cancer and, in some cases, identifying the impact on their treatment.

Just over one-third of slides of women with cervical cancer have been transferred to a Government-ordered review by the Royal College of Obstetricians and Gynaecologists (RCOG), which is supposed to have been completed by now.

The RCOG review in the UK began work last month and is now expected to finish in August, six months late, according to the Department of Health and the HSE.

The delay, which was ordered in response to the CervicalCheck controversy last year, is prompting concern among women who have consented to have their slides reviewed that the two-year statute of limitations might apply before the review is completed. This could affect their ability to take a court case where misreading of slides is alleged.

Of the 1,766 slides to be reviewed, 683 have been sent to the RCOG, officials told a meeting of the CervicalCheck steering committee this week.

An imaging issue that has arisen with the slides tested by one of the overseas labs used by CervicalCheck is being resolved by transferring these slides first to the Coombe hospital in Dublin and then to RCOG, the steering group heard.

The RCOG has been tasked with reviewing the screening history of women with cervical cancer and, in the case of those with “discordant” results, identifying the impact on their treatment. The exact method of operation of the review remains unclear, but it will not deal with issues of negligence in the reading of slides.

A total of 1,075 women had consented to their slides being reviewed by the RCOG by the deadline of last February. Thirteen women who were participating are also having their slides reviewed privately.

The 221 group of women affected by the CervicalCheck controversy have asked the department to fund the cost of private slide reviews – estimated at about €5,000 – but the issue remains under consideration by Minister for Health Simon Harris.

Some 4,600 women whose smears were HPV tested by Quest Diagnostics will have to be retested after the samples expired, the HSE told the steering group. Quest has committed to a four-week turnaround for these results.

Department officials have denied trying to close down the steering group, which includes a number of patient and non-public service representatives.

The minutes of the February meeting of the steering committee, published on Friday, state: “The department stated that the March meeting could be a second-last or last meeting, provided that there was sufficient progress on key areas including the RCOG review, pressing capacity issues, and the HPV project timeline, and that this would be kept under review.”

At this week’s meeting of the committee, officials insisted their remarks were “misunderstood”. Patient representatives said they wanted to the see the terms of the reference of the steering group amended to ensure it stayed in existence until all its major tasks were completed.

The issue is to be further discussed at a meeting next month.