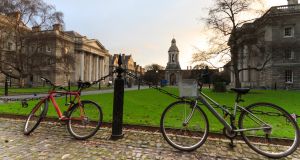 A petition signed by more than 500 TCD students calls for the funding of the University Times to be cut to €3,000, the current equivalent of a single edition. Photograph: iStock

Students at Trinity College Dublin are to vote in an upcoming referendum on whether to dramatically cut funding for a campus newspaper following controversy over its reporting methods in a recent news story.

The referendum was triggered on foot of a petition signed by more than 500 students, a measure contained in Trinity College Dublin Students’ Union constitution.

The petition calls for the funding of the University Times – which is financially supported by the students’ union – to be cut to €3,000, the current equivalent of a single issue of the newspaper.

It also calls for the removal of the editor’s salary and on-campus accommodation.

The newspaper sparked controversy recently when it reported on allegations of an initiation ceremony involving an all-male student society, the Knights of the Campanile.

In the process of reporting, it placed a recording device outside the apartment of the president of the society, where it was alleged the ceremony was taking place.

The University Times reported that members were being taunted, jeered and shouted at over a period of time.

The device was subsequently discovered by members of the society and a complaint was made to college authorities.

Staff at the newspaper defended the recording on the basis that it was in the “public interest”.

The Knights of the Campanile, established in 1926 to “further the sporting activities” of the college, is an all-male society with a maximum of 50 student members allowed at any one time.

Earlier this year, the same newspaper reported a culture of hazing in Dublin University Boat Club where members were, on occasion, ordered to strip to their underwear and whipped with bamboo sticks.

The referendum on funding for the University Times is set to take place on April 10th and 11th.

The newspaper’s editor said the proposal in the forthcoming referendum would represent the “decimation” of its funding and mean future editors would have to edit for free.

A student behind the petition, however, said the referendum was concerned “with the rights of students”.