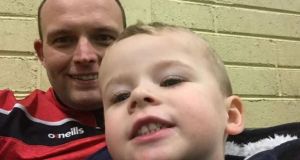 The mother of a boy (2) seriously injured in a hit-and-run in Cork earlier this week has spoken of how she feared her son had been killed when she saw him lying on the road in front of their house.

Aisling Sexton fought back tears as she spoke about the moment that she discovered Zac had been hit by a car that failed to stop outside their home at Castle Meadows in Mahon on Cork’s southside at about 3.50pm on Monday.

Speaking on the Neil Prendeville Show on Cork’s Red FM, Ms Sexton told how she had come home from collecting her older son, Max (7) from school. She was helping him with his homework while her daughter, Belle (4) and Zac were playing in the garden when a young neighbour (Ben) called to raise the alarm.

“And you know, it was like an eerie silence - as if there was nobody around - then they were lots of people in the playground in front of our house and they were coming over to help. But there is a fence between so they couldn’t get in and some people rang the ambulance.

“The neighbours came over and they were helpful. I was just distraught, I couldn’t do anything, I thought he was dead. I just froze, froze with the shock,” said Ms Sexton who thanked her neighbours, paramedics and staff at Cork University Hospital who treated Zac before he was transferred to Dublin.

Ms Sexton and her husband, Paul Higgins travelled with Zac in the ambulance to Temple Street Children’s Hospital in Dublin on Monday evening after he was put in an induced coma. He remains in an induced coma in the Dublin hospital.

Ms Sexton said a CT scan revealed no major brain damage to Zac even though he did have a small bleed into the brain which required surgery. But doctors at Temple Street want to keep him in an induced coma until Sunday or Monday to allow swelling to his brain subside.

She said Zac also suffered a number of broken bones including a broken collar bone. Although he took a major impact from the collision in the stomach area, it doesn’t appear as if he suffered any injuries there.

“He got a big knock to his tummy but it didn’t damage anything - there are all kinds of broken bones including a broken collar bone but please God, they will all heal. The hospital staff said they couldn’t believe it - it’s a miracle that’s he alive- he took the full brunt of the impact and it was high speed too.

“They think they are going to keep him under until Sunday or Monday - they’re being very cautious . They are doing the MRI today so hopefully it won’t show up anything and it’s just a swelling and it’s just all time now . He’s going to have a lot of rehabilitation and everything when he comes out of it.”

Gardai are to forward a file to the DPP after releasing without charge a 17-year-old male arrested in Mahon on Tuesday for questioning about the hit and run. They have also spoken to two of the three passengers they believe were in the car at the time.