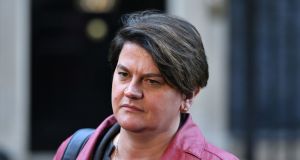 The “Festival of Britain” appears under threat as the DUP will only support it if it is called the “Festival of Great Britain and Northern Ireland” and held in the Fermanagh and South Tyrone constituency of Arlene Foster. Photograph: Dominic Lipinski/PA

There were plenty of Brexit-themed japes to be found on April Fool’s Day this year although, to be honest, they were hard to distinguish from the other scarcely credibly capers we have seen coming from Britain’s corridors of power in recent weeks.

The Daily Telegraph admitted as much in its jokey story. It reported that all April Fool’s jokes had been outlawed in the UK this year as the public there are no longer able tell the difference between “reality and farce”. The story said an parliamentary statute dating back to the seventeenth century was being used to enforce the ban.

The Guardian, meanwhile, told readers that plans were afoot to appoint a “healing tsar” – a unifying figure to promote a feeling of national togetherness – in the post-Brexit world.

The front runner was said to be our very own Bob Geldof a man who “brought the country together with Live Aid – he can do it again,” a source is quoted as saying.

The piece is full of delightful details including news that Do They Know It’s Christmas? has already been reworked with the chorus changed to: “Heal the island, let them know it’s bonding time.”

The story goes on to say the UK’s Labour party would rather Alice Nutter, from Chumbawamba as Healing Tsar while the Tories want David Van Day who – as you will no doubt recall – was the front man with 1970s pop giants Dollar

The working group is also mulling plans for a 12-hour live TV recreation of It’s a Knockout with Remainers pitted against Leavers and a “Festival of Britain”. The latter appears under threat as the DUP will only support it if it is called the “Festival of Great Britain and Northern Ireland” and held in the Fermanagh and South Tyrone constituency of Arlene Foster.

The Daily Express which, it’s fair to say, is fond of the odd alarming EU-tinged story (and stories about foods that cure cancer and cause cancer – ideally at the same time – nice weather, bad weather, uncovering the truth about what really happened to Princess Diana and INAPPROPRIATE capital letters ) went with a Brexity-theme too.

“Eurovision SHOCK as Britain will LEAVE song contest after Brexit,” went the headline. “FEARS Britain was to be BANNED from the Eurovision Song Contest were growing today after the body governing the quality of European pop music warned hard Brexit might mean GB’s Eurovision exit,” the writer Flora Olip – see what they did there? - said.

The story went on to say that the Paris-based “L’Institute de Eurovision Song” had “warned leaving the EU could mean Great Britain’s glorious Eurovision history might come to an end. Britain’s Eurovision efforts have long been enjoyed across the continent and the nations has likewise enjoyed scrupulously fair adjudication at the hands of the Eurovision judges. Vaya Mentira, chief executive of LIES, said: ‘It has with a heavy heart that we have decided Britain should no longer compete in Eurovision’.”

Closer to home, the Dublin Chamber said it had received “numerous reports over recent weeks from concerned local businesses and citizens” about a bend in the Spire.

It suggested it could be “the result of the very strong north-westerly winds which have battered Dublin over the winter months.”

Architectural experts, contacted by Dublin Chamber, added that a heavier than normal light bulb placed on the top of the Spire at the end of last summer may be causing the Spire to buckle.

“Some locals are already referring to the Spire as ‘the leaning tower of Dublin’,” the Chamber said and it called for an emergency response group to be assembled urgently to explore the issue and to ensure that the issue is corrected before the main tourism season commences in only a matter of weeks.

According to the Chamber’s Head of Communications Graeme McQueen when businesses first started calling it about a bend in the Spire “ we wondered whether it was a joke. Having examined the Spire last week we can clearly see that the Spire is starting to bend. Dublin is expected to have one of its best ever summers for tourism this year, so it is vitally important that any twist in the Spire is corrected as soon as possible. The Spire is one of the most photographed structures in Dublin. The last thing that Dublin needs is for tourists to go home with pictures of Dublin’s ‘wonky’ Spire to show their friends and relatives abroad. This would make us look like fools.”

The Star had a story written by Avril Fooley about a petition calling for a character who recently appeared on Alan Partridge’s BBC programme This Time singing Come Out Ye Black and Tans and the Men Behind the Wire to run in the local elections in Sligo.

Meanwhile the Herald’s new reporter Owen Lee Messin told readers that the people of Co Meath were up in arms over plans to build a 50-foot statue of Liam Gallagher holding a bag of crisps in Tayto Park.

It is not just newspapers who play tricks on the public – April Fool’s Day is also a big deal for big brands too.

We were delighted and appalled in equal measure by a Dublin yoga studio’s efforts this morning. The Elbow Room in Smithfield was offering naked yoga classes for new members. “This will give you a real feel for the studio and allow you to go deeper into postures without the distraction of clothes or modesty,” the studio said in an Instagram post.

And then there was the Dún Laoghaire Coast Guard which posted on Facebook about the discovery in Dun Laoghaire’s inner Harbour of two alien skulls. “On arrival one skull had washed out to sea however the second one was recovered by the Coast Guard Unit. The RNLI have launched in search,” the post said. On closer inspection the alien skull was in fact a milk carton.

And speaking of UFOs and the like Ryanair said it would soon be offering flights to space as it moves to take on Elon Musk and Richard Branson in the space race. “Twenty years from now, tourists will not be content with a week in Spain, or a fortnight on the beach in Turkey. They will be looking further afield, maybe to Mars, but certainly as far as the moon and the outer limits of the stratosphere,” the firm’s head of space development, “Eprila Murka”, said.

Anxious to avoid charges of discrimination from tall people, Walkers Shortbread said it would soon be selling invented “tallbread”, a shortbread finger that were three times the length of regular ones.

Yorkshire Tea said it had invented spreadable tea which sounds almost as disgusting as the mash-up between Cadbury and Heinz which resulted in the Cadbury’s Creme Egg Mayonnaise. “We’re very happy to report that it’s absolutely delicious,” a spokeswoman said. “A real taste adventure. The only question we’re asking ourselves is why we haven’t done it sooner?”

Sainsbury’s in the UK told the world it would be stocking Pink Avocados for a limited time only after making a breakthrough with a supplier in Peru to give the normally green fruit a rosy hue, while the cookie company Maryland announced plans to add chunks of smashed avo to its gluten-free cookies in place of chocolate chips.

The Kia car people launched a touchscreen steering wheel called the Finger Operated Optimum Lever. It will allow motorists to swipe right or left depending on the direction they wish to go in.

The Duolingo language app is taking its reminders from the virtual world into the physical one by sending green owls to the homes of those who have let their attention wander, while the International Cricket Council (ICC) tweeted that in the future players’ Instagram handles would appear alongside numbers on their kits.

The Lyrath Estate in Kilkenny announced that its dog had “unveiled his newest creation, ‘Eau De Rudy”’. A release told us that the “delicate perfume has been made by Rudy together with a team of canine fragrance experts in a bid to bring a fresh new whiff to the market”.

Smith & Sinclair, which describes itself as “alcohol and confectionery innovators” and “Willy Wonka for grown-ups”, said it would give the world a tablet to turn water instantly into alcohol. Called Magic Merlot, the tablet is made with “freeze-dried grape and fruit waste from a Merlot wine barrel” and “an effervescent tablet also containing sugars and turbo charged yeasts which allows fermentation to happen in a matter of minutes, not days.”

But our favourite April Fool’s gag this year goes to a school teacher in Monaghan. She gave each of her students a small envelope with “doughnut seed” in it. They envelope encouraged the children to plant the seed in their garden and wait for a dough nut tree to grow.