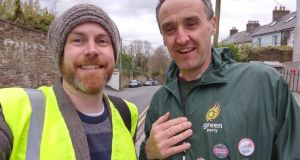 The Green Party in Cork has asked officials of Cork City Council to meet with residents seeking an “eco-graveyard” in the city after the council passed a motion calling for such a facility in the city.

Green Party Cllr Oliver Moran explained an “eco graveyard” allows a person to be buried without chemicals and unnecessary markings and where the cemetery supports biodiversity through the planting of trees and wildflowers.

Cllr Moran said he had raised the issue amid growing interest from people having such an option and Cork City Council said it will set aside an area within existing cemeteries for eco-burial, if demand for such burials develops.

“I’m taken aback by the interest and support for the idea, even from people who wouldn’t be natural environmentalists. There’s a genuine interest that in death people would exist at peace with the world and nature,” he said.

“The support from Cork City Council, if there is demand, is very encouraging. I’ve asked now for a meeting between interested residents and the relevant officials to explore the idea further.

“An eco-graveyard already exists in Wexford, but it is a privately-run cemetery. If Cork was to develop its own, it would be the first local authority in Ireland to support the option.”

One person who wants to be buried in this way is Green Party member, Mark Cronin who said eco-graveyards aim to be a natural and peaceful place where loved ones are commemorated without hindrance to nature.

“Eco-graveyards and eco-burial is becoming more of a feature in Britain and the USA. It reflects a growing awareness among people of the lasting damage being done to the environment and biodiversity by human activity.

“Traditional cemeteries contribute to loss of biodiversity and pollute the soils through chemical additives. They become an animal-free area. Even in death, humans can prevent the natural cycle of nature.”

Meanwhile Cllr Moran also welcomed confirmation by Cork City Council that it plans to appoint a Trees officer early in the New Year which will build the capacity of the council to protect and build a green city.

“The vision for the Trees Officer is very much someone who is ‘wellies on the ground’, someone who is engaging with local communities and who can spread knowledge and best practice across the city,” he said.

“Cork has been very envious of the Dublin Trees Strategy. Dublin already has a Trees Officer and they’re able to drive forward a trees policy. That’s not just about protecting trees but also making sure the right tree is in the right place.

“That can avoid a lot of problems residents make about trees before they ever happen. The overall of benefit of doing things right is about keeping the benefit of having trees and biodiversity at the heart of the city.”

Meanwhile Cllr Moran’s Green Party colleague on Cork City Council, Cllr Dan Boyle has welcomed confirmation from Cork City Council that it plans to plant some 500 trees around the city before the end of the year.

Cork City Council’s Director of Services David Joyce said 203 trees have been removed largely because of disease or storm damage while a further 189 trees were either removed or heavily pruned after damage by Storm Ellen in August.

“It is important to note that the decision to remove any tree is only carried out following an inspection and recommendation from a qualified arborist,” said Mr Joyce in a written reply to Cllr Boyle, reported in The Echo.

“A total of 345 semi-mature trees (20 years old & 7 metres high) were planted between January and March 2020 and It is anticipated that a further 500 trees will be planted before year end,” he said.

“In addition, Cork Chamber has generously offered to sponsor the planting of 200 trees in parks and open space areas each year for the next five years and work to identify suitable locations for these trees is now underway.”

Cllr Boyle welcomed the news, stating that it was “a largely positive response” from Cork City Council. “It shows that the city will no longer be tree neutral as we had been in 2019,” he said.