Grafton Street in pandemic lockdown, where patience is wearing thin

Conor Pope reports from Grafton Street, Dublin a month after he did so when coronavirus restrictions began and sees an increase of footfall in the area despite those restrictions still being in place. Video: Bryan O'Brien 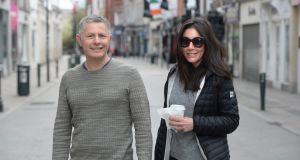 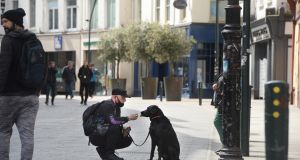 One month on from the imposition of the first severe Covid-19 restrictions, there were distinct signs on Dublin’s Grafton Street on Monday that people are becoming increasingly frustrated.

Just a handful of shops were open, but more people were about. Small groups carrying bags from Boots and Dunnes Stores trickled out of the St Stephen’s Green Centre.

However, Monday was quieter than the weekend. “It is busier than it was at the start of April for sure, but today is nowhere near as bad as it was on Saturday. That was mental,” one security guard said.

Nearby in Government Buildings on Merrion Street, official Liz Canavan was issuing her weekly morning bulletin, urging people to stay at home, extolling the progress made, but warning that there is more to do.

Walking towards St Stephen’s Green, Patricia O’Rourke, however, was not a happy shopper. “It is all a mess,” she said simply. “The green is closed one minute and then open the next.

“Then we have people coming down here from the North and in through the airport and I can’t even visit my brother on the other side of the city even though he is sick.”

Patience is wearing thin. “You can do this for a certain amount of time, but then it gets too much. All I want to do is see my family. I am not interested in going to pubs or restaurants or parties.

“If restrictions were relaxed even a little bit then I could go and see my family, that is all I want to do now,” said O’Rourke, who lives on Kevin Street.

The idea that older people could remain living with restrictions for months horrifies her.

“It is too much. I was sitting in a park a few days ago and a guard told me I had to go home as I couldn’t be out for more than an hour. I wanted to challenge him but I didn’t know if what he was saying was true so I didn’t.

“But I was just sitting on my own on a bench in a park. I don’t know what harm I was doing,” she said, as some people passed by wearing face masks, or scarves, some worn tightly, others dangled loose.

Gesturing towards some of them, O’Rourke said: “To be honest I think the people who were stupid before are stupider now. I think Leo [Varadkar] will be strangled if there isn’t some sort of lift. Apart from anything else I need the hairdressers badly.”

Ara Lopez from Mexico and her flatmate Joaquin Figueroa spoke during a break from buying groceries. “It is a little sad to see Dublin like this,” said Lopez, pointing to boarded-up shops.

“We live in a small apartment and have no outside space but we are staying positive and we walk a lot every day around the city and then we go shopping. That is just so weird and full of drama,” she added.

John Gannon from Dublin 7 should be travelling soon, but everything is on hold. For him, the key to salvation has been a morning walk and nightly online viewings of New York’s Metropolitan Opera: “It has been just beautiful,” he said.