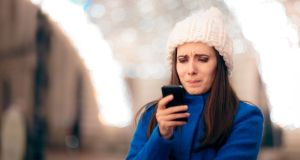 The ICCL found that most victims of online abuse are women, and that perpetrators were most commonly partners, prospective partners or ex-partners who were “attempting to exert control”. Photograph: iStock

The Government should amend legislation to outlaw the creating and sharing of private sexual images without consent, a civil liberties group has said.

The Oireachtas Committee on Justice and Equality is set to meet representatives of Facebook, Twitter, Google and internet service providers to discuss online harassment and harmful communications on Wednesday.

Speaking in advance of the meeting, the Irish Council for Civil Liberties (ICCL), which will appear before the committee in two weeks, has called for the Non-Fatal Offences Against the Person Act to be amended to make it illegal to create or share private sexual images without consent.

It also called for legal aid to assist victims to take cases when their rights have been violated in this way.

In its submission to the committee, the group has outlined its research into online harassment in Ireland.

The organisation found that most victims of online abuse are women, and that perpetrators were most commonly partners, prospective partners or ex-partners who were “attempting to exert control”.

Examples of harassment included the use of spyware - intended for parents who monitor their childrens’ activities - to spy on women.

ICCL also referred to the case of Dara Quigley, a woman who took her own life a few days after CCTV footage of her without clothing - which had been held by An Garda Síochána - was shared online and viewed approximately 125,000 times.

Elizabeth Farries, ICCL’s information and privacy rights programme manager, said that nobody has ever been held accountable for the “appalling violation of Dara’s privacy”.

“This sends a very clear message to perpetrators of image-based sexual abuse, who are mainly men, that they can get away with it,” Ms Farries said. “That has serious ramifications for our society - our gender, sexual orientation, race, religion, ethnicity, mental health, and ability can present as risk factors for online harassment and abuse.”

She added: “This prevents us from availing of online or offline spaces with the same freedom as men.”

ICCL also criticised the current CCTV system. It argues that CCTV does not effectively deter crime, that crime levels in Ireland are not sufficiently high enough to merit blanket surveillance of a population and that CCTV has a bigger impact on certain populations more than others.

The group makes a number of recommendations for reforms in this area. It recommends that tech companies “engage with human rights reporting standards when moderating harmful online content” and that An Garda Síochána should take a number of steps to ensure that what happened to Dara Quigley can never happen again.”

Last week, the Justice Committee heard an increasing number of children are sharing self-taken sexually explicit images of themselves in chats such as Whatsapp.

Gardaí warned that these images are often circulated to third parties who may then use them to trap the child into engaging with them.