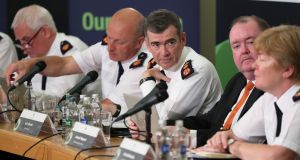 An Garda Síochána’s budget is to be increased by €81 million next year to help fund the recruitment of up to 700 new members.

Overall funding for the Department of Justice and its agencies has been increased by €120 million to €2.7 billion to cover the costs of Garda reforms, rising prison populations and the increasing numbers of asylum seekers in the direct provision system.

The Garda budget has been set at €1.86 billion which will support projects recommended by the Commission on the Future of Policing and provides for a targeted severance scheme for senior officers.

This has been a key goal of Garda management in recent years, with the aim to increase the proportion of civilian employees to 20 per cent by 2021.

There is no specific provision for increased funding for garda overtime for next year. Mr Harris recently announced there would be overtime ban for the rest this year, save for in exceptional circumstances, due to a €32 million Garda budget overrun.

Capital spending across the justice sector is to increase by €70 million to €256 million next year with the money going towards developments such as the completion of a new Forensic Science Ireland (FSI) lab in Backweston, Co Kildare, which is due to be finished by 2021.

It will also be used to relocate the Garda offices on Harcourt Street, Dublin to Military Road and to refurbish the male and female sections of Limerick Prison. Some of the capital budget will also spent upgrading the Garda IT system.

Some €1 million has also been set aside to fund the establishment of the Judicial Council following the passage of relevant legislation this summer. The aim of the council is to promote standards of conduct, education for judges, develop sentencing guidelines and improve public confidence in the judiciary.

Funding for the Irish Prison Service and the Court Service have been increased by €24 million and €12 million respectively to help handle increasing case loads and rising inmate numbers, which are up by 11 per cent over the last two years.

Some €10 million will also be made available to fund “the cost of the significant pressures being faced by the direct provision system”. The money will be used to fund centres around the country, including the establishment of new centres to house the increasing numbers of asylum seekers arriving in the State.

The 38 existing direct provision centres are currently operating at full capacity and an additional 1,400 people are being housed in 34 emergency accommodation centres. The Department of Justice is expected to spend €120 million on direct provision this year, a 50 per cent increase on last year, with the majority of the money going to private operators.