A climate budget, an election budget, but mostly a Boris budget

Analysis: Donohoe set out a €1.2bn package for responding to a no-deal Brexit 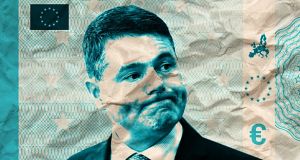 Paschal’s day in the sun was overshadowed by the UK prime minister, Boris Johnson, and his Brexit negotiations

Budget Day is invariably associated with one individual: the Minister for Finance. This is their day in the sun. He or she even delivers it from the seat in the Dáil chamber normally occupied by the Taoiseach.

This year, it was a little different. Paschal Donohoe has been overshadowed by another politician – Boris Johnson.

As if to hammer home the point, the UK prime minister’s phone conversation with German chancellor Angela Merkel ended up taking headlines on Tuesday morning, with sources in Downing Street saying “negotiations” over Britain’s “modest proposal”’– such as they were – had hit the buffers.

Budget 2020 could have been a lot of things – an election budget, a green budget, a Fine Gael fiscal prudence budget. As Donohoe spoke in the Dáil, the overarching theme became increasingly obvious. It was a Brexit Budget, more specifically, a Boris Budget.

In plain English, that means a budget providing for a no-deal Brexit, an eventuality that looks more likely. Like all budgets in recent years, this one has been almost wholly pre-announced. But even with all the knowns, it was still bracing to hear the raft of measures Donohoe announced to deal with unknowns that will come with a crash-out Brexit.

There are two scenarios painted by Donohoe, one for an orderly Brexit, the other for a disorderly one. There are very few people at this stage who remain fastened to a happy outcome. It is more or less accepted that the worst-case scenario is being looked at.

Donohoe’s overall package for responding to Brexit is just over €1.2 billion. Some €200 million of it will be made available for spending in 2020. There will be an allotment of €650 million to Agriculture and Fisheries, Enterprise and Tourism, the sectors that will be most impacted. In addition, there will be €365 million made available to cover increased demands on social welfare.

The budgetary measures to deal with Brexit will lead to a deficit of 0.6 per cent but Donohoe argued that it was necessary to take all the “extra steps we are taking to face up to the risk of a no-deal Brexit”.

Dealing with a crash-out Brexit in the most conservative and cautious manner was always going to be on the cards. With that in mind, Donohoe unveiled hi decision to hold back €500 million of the money allotted for the rainy day fund this year. He argued that if the “economic impact is more severe [than anticipated] it is sensible to use the resources otherwise dedicated to the rainy day fund”.

In other words, a no-deal Brexit is the rainy day.

Only time will tell if it is enough.

The primary focus of the Budget - protecting vulnerable sectors of the economy - was recognised by Fianna Fáil’s finance spokesman Michael McGrath in his response. “It’s not a time for politics as usual,” he said, adding that his party’s decision to allow the Government the time to draft a fourth Budget has now been vindicated.

The second big theme of this Budget was climate change. It has become the issue of the age and the impetus for change is now overwhelming. Successive Fine Gael-led governments have dragged their heels on this issue but the rhetoric has been ramped up since Leo Varadkar became taoiseach and a Climate Action Plan has finally been published.

Most focus centred on the carbon tax and the amount the Government would increase it by.

The long-term target is for the price of carbon to increase to €80 a tonne by 2030. The Government’s target is a modest trajectory of about €6 a year over 10 years.

Donohoe opted for the widely-predicted €6 per tonne of carbon emissions. It will mean an extra 16c on a bale of briquettes and 2 cent at litre on petrol and diesel. That increase falls far short of the €15 per tonne recommended by the Climate Change Advisory Committee, and the €20 called for by the Greens.

There was also a sting in the tail. While the increase will apply immediately for diesel and petrol, heating fuels will have a moratorium until next May when the winter heating season is over.

The funds generated from cabron taxes will be ringfenced with a €2 increase in the fuel allowance (now energy allowance) and further incentives to retrofit homes. There’s also a new (separate) nitrogen tax that will see taxes on new and imported diesel cars increase significantly. There is big ambition on electric vehicles but no significant push in this budget to increase the uptake.

Another interesting aspect of the budget announcement is that some €30 million of the revenues will go to five midland counties which will be affected by the closure of peat-burning power stations.

It includes alternative employment schemes, a peat rehabilitation initiative and a just transition fund of €6 million.

Is it enough? Hardly, according to climate activists. It will not be sufficient either to convince voters who switched from Fine Gael to the Greens in the May elections to revert to the party, if the environment is a major issue for them.

If you go back to election budgets of the past, there was only one word to describe them and that was “giveaway”.

There is little evidence of spending in this budget on any of the issues that will be pivotal for voters in the upcoming general election.

It is a very rare occurrence for a Minister for Finance to make a virtue of the fact he is implementing no income tax breaks, only months before people go to the polls.

“I will not commit to across the board income tax cuts,” he said, on the basis they would add to instability.

“Decisions made this year may be reversed in future. I do not want to go down that path,” he said.

So the tax changes are minuscule.

There is a significant increase of €1 billion in health spending but that incorporates €335 million in overspending this year. The €25 million extra for the National Treatment Purchase Fund was claimed as a win by Fianna Fáil, as was the allocation of funds to allow for the recruitment of up to 700 extra gardaí.

Another major issue – housing – was addressed by relatively modest initiatives, some €80 million more for the Housing Allowance Payment scheme and some more funds for social housing.

The Independent Alliance claimed some credit for 50,000 more over-70s being eligible for the medical card, and for the just transition fund for the midlands. Under-8s will get free medical cards. And the social welfare increases, including extra allowances for carers, were also modest.

In the speech, Donohoe noted it was a year of buoyant revenues to the Exchequer, but immediately added: “Stability is a very precious commodity.”

That provided a very accurate summary of his approach to his Boris Budget.