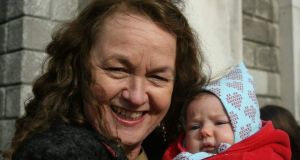 Midwife Philomena Canning has asked that her case be expedited so that her lawyers fees can be settled, so that she can be compensated for damage to her practice, her livelihood and her good name. Photograph: Courtesy of AIMSI

Supporters of a terminally-ill midwife have called on the Minister for Health Simon Harris to intervene and ensure that her case with the HSE is settled before it is too late.

Philomena Canning, who has ovarian cancer, has taken a case against the HSE which withdrew her indemnity insurance to practice as a midwife pending an investigation into two alleged breaches of security.

Her indemnity was restored in February 2015, but she could not practice until a systems analysis was done by the HSE.

Ms Canning, whose midwifery practices were exonerated by both her own and independent experts following the systems analysis, has taken the HSE to the High Court seeking damages. She wants the case settled and compensation paid so she can get access to an experimental drug Pembro which costs €6,000 a dose.

She says time is running out for her for a legal action as there was no “due process” in her dismissal and no evidence against her.

She said the decision of the HSE to withdrew her indemnity cover which meant she could not practice as a homebirth midwife amounted to the “end of my professional life in one fell swoop”.

It also meant that 30 mothers she was attending to at the time had to find alternative arrangements to give birth.

The Association for Improvements in the Maternity Services Ireland (AIMSI) has called on Mr Harris to ensure that the case is settled with Ms Canning before it is too late.

AIMSI chair Krysia Lynch described the HSE’s approach to it as a “farce” and that the executive’s own expert witnesses had cleared Ms Canning of any wrongdoing.

“Despite all of this the HSE has persistently delayed a High Court settlement and appears able to act with impunity in this matter. The continuing nature of the case against Ms Canning resulted in untold damages to her practice, her livelihood and her good name,” she said.

“Furthermore, many pregnant families were denied her excellent care. The whole episode is appalling and many international human rights observers have been justifiably shocked at her ongoing treatment.”

Ms Canning has asked that her case be expedited so that her lawyers fees can be settled, so that she can be compensated for damage to her practice, her livelihood and her good name.

Ms Lynch said she had been contacted by hundreds of women and midwives asking what they were going to do to support Ms Canning.

Ms Lynch maintained the HSE’s handling of the case “inspires absolutely no public confidence whatsoever and it is up to the Minister to right a grievous wrong as soon as possible.”