Is this the face of Ireland’s lost patriot Robert Emmet? 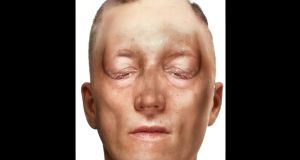 The new depiction of what Robert Emmet looked like reveals the trauma he suffered during his execution. Image: Matt Loughrey/My Colourful Past

Robert Emmet’s rebellion of 1803 lasted only a single day but his reputation, thanks to his much quoted epitaph and the tragedy of his short life, has endured for more than two centuries.

Images of Emmet are based on sketches taken at his trial at Green Street courthouse in September 1803 following his doomed rebellion which went disastrously wrong on July 23rd of that year.

The side-profile images were sketched by a court artist and have formed the basis of what we think he looks like.

It depicts a prematurely balding young man – he was only 25 when he was executed – with a sharp nose and a long fringe.

Most portraits since, some of them idealised, have been based on the court sketch.

Now, a group of documentary makers believe they can reveal what Emmet really looked like.

He was hanged outside St Catherine’s Church in Thomas Street on September 20th, 1803. It was a gruesome execution as the diminutive Emmet lingered for half an hour because the rope had not been calibrated properly.

After his death, his head was cut off as a warning to others. His friend James Petrie took a plaster case of his face and created the “death mask”.

After that his body was dumped somewhere and was never found – fulfilling his own epitaph when he asked that his tomb remains uninscribed until “my country takes her place among the nations of the Earth”.

The death mask formed the basis for a portrait of what Emmet looked like. It will be shown for the first time as part of Scéalta Grá na hÉireann, a series on great Irish love stories made by independent production company Bo Media for TG4.

Wednesday night’s programme will tell the story of Emmet and his tragic love affair with Sarah Curran. She was only 26 when she died, five years after Emmet, having been estranged from her family.

Using X-Oculi, a three-dimensional technology that recreates old images, Matt Loughrey of My Colourful Past brought the death mask image to life.

“Five years ago this would not have been possible,” he said. “Relatibility is pivotal to engagement and therein a further and better understanding of our collective past.”

Bo Media director, Paddy O’Shea, said he was “speechless” when he saw the final image. “Here was Robert Emmet brought to life. Suddenly I felt Emmet was a real person and not just a character in this incredible story.”

The death mask reveals the trauma Emmet suffered during his execution. His hair is shorn off and the pressure of the hangman’s noose caused marks at the edges of his eyes.