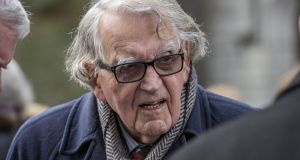 Dr Maurice Hayes said the Garda Inspectorate’s 2015 report “Changing Policing in Ireland” had not yet been acted upon. Photograph: Brenda Fitzsimons

A former member of the Patten Commission on policing reform in Northern Ireland has questioned the need for the “root-and-branch” review of An Garda Síochána, warning against it becoming a “scalp-hunting” exercise.

Dr Maurice Hayes, the former senator and one-time Northern Ireland ombudsman, said that the Garda Inspectorate’s 2015 report Changing Policing in Ireland had not yet been acted upon.

The key to bringing about change to the Garda was through regular reports tracking the implementation of reforms, as the Patten Commission recommended and achieved, he said. He suggested that the Policing Authority could play “a more active role” in reforming the Garda.

“They are in danger of over-complicating things,” said the former Stormont civil servant of the Government’s review.

“They have a very good report from the inspectorate, which is sitting there. They have all sorts of other inquiries going on and to start tramping over the ground again seems to be a recipe for some degree of delay.”

Dr Hayes said that “scalp-hunting” would change the nature of the inquiry. Garda Commissioner Nóirín O’Sullivan has come under mounting pressure to resign over a series of controversies to plague the force.

The Government announced the setting up of the Commission on the Future of Policing in Ireland and this week named Kathleen O’Toole, former head of the Garda Inspectorate and current chief of police in Seattle, to lead the review.

“I am sceptical, honestly,” said Dr Hayes. “I think if they could just make use of the material that is there and the people who are there, and get a bit of implementation.”

He expressed concern that the review could affect the morale of rank-and-file gardaí, distracting them from their work.

There should be a greater focus on improving the “first line of management – sergeants and inspectors” through in-service training, he said.

Dr Hayes described technology standards within the Garda as being “a couple of decades behind” the levels of those of police in Northern Ireland.

The Garda revealed in March that almost one million roadside breath tests that never occurred were falsely recorded and thousands of court summons were issued for offences that should have been addressed by fixed-penalty notices.

Ms O’Toole has defended her independence to lead the review, rejecting claims that her role on the interview panel that appointed Ms O’Sullivan in 2014 presented a conflict of interest.

The former Boston police commissioner said by email from the US that she was a professional acquaintance of RUC Chief Constable Ronnie Flanagan prior to her work on the Patten Commission, which recommended that the RUC be replaced by the Police Service of Northern Ireland after the 1998 Belfast Agreement, and “it did not influence my work there”.

She also pointed to the fact that the Policing Authority chair Josephine Feehily sat on the selection panel that picked Ms O’Sullivan.